John Ferguson was a Golden Age writer whose work enjoyed some success in its day but has seldom been discussed in modern times. He was a Scot who made a remarkable transition in life: he was a railway clerk who became ordained as a clergyman and earned a separate reputation as a crime writer and playwright. In the field of detective fiction, he was talented enough to be snapped up by Collins Crime Club. His ministry took him far and wide, and a spell in the Channel Islands gave him background material for Death comes to Perigord, which might just be the earliest detective novel to be set in Guernsey. 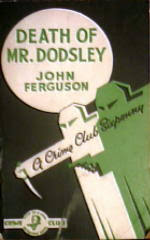 I came across Death in Perigord many years ago in that very good series of Dover paperback reprints of vintage mysteries. Although I recall being underwhelmed by the plot, the setting appealed to me, and I decided to seek out Ferguson titles whenever I could find them. Perhaps because he had a full life, he was far from prolific: the invaluable GADetection site lists just ten crime novels, published between 1918 and 1942. Yet his versatility as a writer was impressive. He was a playwright of some renown, and he also wrote historical fiction, one of his books being set in the time of Bonnie Prince Charlie. In the crime field, Dorothy L. Sayers admired Night in Glengyle, although she was less enamoured of The Grouse Moor Mystery, a venture into the 'impossible crime' field. I rather share her view of the latter; as for the former, I acquired a copy a while ago and hope to cover it on this blog before long.

One of Ferguson's greatest strengths was that he wasn't content to work to a formula, and Death of Mr Dodsley, published in 1937, is a bibliomystery concerned with the murder of a bookseller in his shop on Charing Cross Road. There's an opening chapter set in the House of Commons, although the bulk of the story concerns the detective efforts of the official police and Ferguson's series detective, the Scottish private detective Francis MacNab. MacNab is a sympathetic character, but we don't learn much about him in any of the books that I've read, and this is rather a pity.

This is a story where, as Ferguson makes clear in a dedicatory preface, the emphasis is on a 'fair play' puzzle. Not for the first time with Ferguson, I felt that the early part of the story was the best, before we get embroiled in the complications of the plot, This is because, although I sense from occasional passages in his fiction that he was very interested in human behaviour, there is a sense of constraint about the writing that keeps one at a distance. I don't have the same experience with Agatha Christie's books, despite the criticisms so often made of her presentation of her people. Ferguson is, therefore, to some extent a frustrating writer, but Death of Mr Dodsley is nevertheless an interesting example of period detective work.

I just found a copy of this very paperback edition last month and am planning on reading it next month. I thought it was quite a find and was hoping to scoop the blog writers with a review. Guess not such a find if you got one too. I've read only Murder on the Marsh by Ferguson and enjoyed it. He does not, however, always play very fair with clues. Still have to read Death in Perigord. I have the Dover reprint, too. Congrats on snagging a copy of this, the last of the Francis McNab mysteries! Very rare book, I'd say.

Strictly, the Guernsey-based book is called "Death Comes To Perigord". (I'm sure I've read it, but apart from the fact that Perigord is the name of a house, nothing of the plot has stayed with me.)

Incidentally, it seems that Ferguson does not have a page on Wikipedia!

Hi John, it is a pretty uncommon book, despite the fact that there was a paperback. I'll be very interested to learn what you make of it.

Jonathan, you're quite right, and I've made a correction. Yes, he really has faded from sight quite dramatically given that he achieved quite a bit of success before the war.