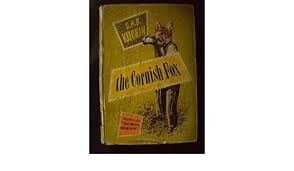 C.H.B. Kitchin is a writer who has long interested me. There is no doubt that he was a talented author - and talented at a whole range of other things as well. Possibly the breadth of his interests counted against him to some extent as a novelist. His books came out infrequently and he only wrote four detective novels, each featuring Malcolm Warren, as well as an excellent crime novel, Birthday Party, which I discussed in The Story of Classic Crime.

The Cornish Fox was published in 1949, twenty years after Warren made his first appearance, in Death of My Aunt, a book admired by Dorothy L. Sayers and many other good judges. Kitchin didn't build quickly on that first success. He was a stockbroker by profession, as is Warren, and both men were to some extent dilettantes. And after this book appeared, Warren detected no more.

It's a curious book, intriguing if not altogether successful. Kitchin could write very well, but he seemed to struggle with plot structure - quite a handicap when writing a novel in the Golden Age style. This story veers between a study of a post-war community in a remote part of Cornwall and a mystery which apparently has its origins in a poison pen letter signed by 'The Cornish Fox'. The identity of the letter writer seems clear, but Kitchin does have surprises in store.

The story meanders along and it's a very long time before we see much dramatic action. There are also perhaps rather too many characters (and I speak as an author who likes putting a lot of characters in my own books! but there are limits...) And there's definitely too much about algebra! It's not clear what the story is really about until near the end, but the key revelations are presented in a strange way, especially when a detective sets Warren a set of 'exam questions' about the case. Unusual, and - despite various flaws - worth a look. I hope to write more about this novel on another occasion.

I read this book back in Feb of 2014 and honestly I have almost no recollection of it. The only thing I remember is someone buying items (wine, I think) on the black market for a party.

Yes, there are some fascinating period touches, but the story is so-so, partly because of the way it's told.