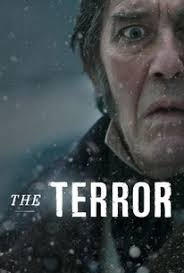 I find it far from easy to explain why I started watching The Terror, or why I got so hooked that I devoured all ten episodes as quickly as a Tuunbaq devours....no, no, I ought to avoid spoilers! During the pandemic, I've concentrated on finding as much fun as I can, and it has to be said that The Terror is not a fun watch. But it really is compelling, for reasons that aren't easy to convey.

There are crimes aplenty in the story, and a good deal of mystery, but it's essentially a historical drama with a tinge of the supernatural. In a nutshell, it's based on a true story, that of a doomed attempt to discover the North West Passage in the middle of the 19th century. The source material is a novel by Dan Simmons, which supplies a fictional account of what happened to the crews of two ill-fated ships, the Erebus and the Terror, on an expedition initially led by Sir John Franklin (a powerful performance by Ciaran Hinds).

There are occasional jumps in time, as well as back and forth between London and the Arctic, but it's not too confusing. In London, Franklin's wife (Greta Scacchi) leads calls for the expedition to be rescued, but the main focus is on the frozen wastes of the far north. The photography is stunning, and one can perhaps detect the influence of the executive producer, Ridley Scott. The background music is also impressively atmospheric.

The story runs for ten episodes, which is often far, far too long for a TV show (two episodes being too long for Finding Alice!), but in this case the scripting, by David Kajganich, is taut and consistently gripping. The acting is brilliant, with Jared Harris (son of Richard) especially good as Captain Crozier, while Adam Nagaitis is an excellent baddie. One unexpected stand-out performance comes from Paul Ready, previously known to me from the very entertaining comedy Motherland, who is superb as the gentle and utterly decent doctor Goodsir.

Be warned, this is a gruesome story. You might say it's not for the squeamish, but I'm quite squeamish, and although there were scenes which made me want to look away, overall the brilliance of the whole production kept me glued to the screen. Mind you, I'm now in need of some unthreatening light entertainment....

Thank you, wonderful review (and I agree wholeheartedly). It's amazing to look at (except maybe for the you know what) and I too really enjoyed the depth given to the crew members brilliantly played by Nagaitis (a Chorley local) and Ready. It's pretty rare to get any kind of working class voices in drama now, so hats off to the producers and actors. It's that rarity where every cast member is perfect and the production values are spot on. It's pretty creepy too. On the strength of it I began to read the Dan Simmons doorstopper potboiler.
"Ice, ice, ice everywhere. And some snow." That was the first fifty pages so I gave up, I'm afraid. For anyone wanting a literary fictional take on the Franklin Expedition I'd recommend Robert Edric's The Broken Lands.

Martin, I’m currently watching “The Terror” and thoroughly enjoying it. I’ve been interested in the Franklin Expedition since my teens (I’m sixty). We may never have a full account of what happened and there are been many myths and legends about the famous Lost Expedition but what we do know is that this is a story of genuine bravery and endurance. The wrecks of both Franklin’s ships have now been found (“Erebus” in 2014 and “Terror” in 2016). Parks Canada have some videos on YouTube showing the wrecks which are incredibly well preserved; “Terror” is particularly fascinating as, below deck, it appears to be in apple-pie order.

Thanks, Arkady. Yes, as you say, Nagaitis is a Chorley lad, and very gifted. Sorry to hear that the book is a disappointment. I've come across Edric's crime fiction but not that book.

Michael, that's helpful. I'll check out the Youtube clips. I do feel The Terror maintains its grip throughout all ten episodes - which is quite a feat.

A tough watch - I had to look away on a number of occasions - but impressive on so many levels. The acting, the photography, the music.