Forgotten Book - Murder in the House of Commons 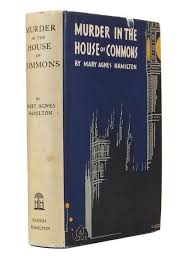 Ellen Wilkinson's The Division Bell Mystery is a fascinating example of a detective story with a political background which benefits from an insider's know-how: the author was a leading figure in the Labour movement between the wars and in the 1940s. The book was quite well-known even before it reappeared as a British Library Crime Classic. But it was anticipated by a novel published in 1931 by another prominent female Labour politican which has rarely been discussed. This is Murder in the House of Commons by Mary Agnes Hamilton.

Hamilton (1882-1966) was a  Manchester-born writer, broadcaster, and civil servant who served as Labour MP for Blackburn from 1929-31. Her brief Parliamentary career came to an end with her party's political collapse in the general election. Unlike Wilkinson, who was a politician to her fingertips, she did not return to Westminster. But she turned her knowledge of the political scene to account in her novel.

Hamilton was educated at Cambridge and had a varied literary career. She wrote a book about Greek legends, biographies of women trade unionists and Ramsay MacDonald, anti-war fiction, a book about John Stuart Mill, and much more. Quite a polymath. I don't know why she didn't write more detective fiction. I suspect the simple explanation is probably right - that, like a lot of intellectuals during the Golden Age, she dabbled with the genre without having a passionate commitment to it.

A very good judge strongly recommended Murder in the House of Commons to me, and it is conspicuously well-written. The Westminster setting is used throughout, which makes for a slightly claustrophobic feeling, and the focus is on amateur detective work conducted by a couple of Parliamentarians. An oddity is that neither the victim nor one of the key characters spends much time on centre stage, and the book is very talky.

Intriguingly, there is a seal before the solution - a marketing gimmick that Hamish Hamilton had used previously when publishing UK editions of John Dickson Carr's first novels which were Sealed Mysteries. I don't know if Hamish Hamilton used this device on other books by other British authors. This title is rather a curious choice for the 'sealed mystery' approach, since the whodunit puzzle isn't especially strong. I doubt Mary Agnes Hamilton was much interested in ingenuity for its own sake. This is an interesting novel in a number of ways, but I don't think that Hamilton was, for all her literary prowess, really a top-flight storyteller. The Division Bell Mystery is less ambitious as a novel, but the story has greater verve.

I was rather disappointed by The Division Bell Mystery but Parliament certainly makes a great setting for a murder mystery.

Yes, Anthony Berkeley's Death in the House is another example, though I must admit it's my least favourite of his novels of the 30s.