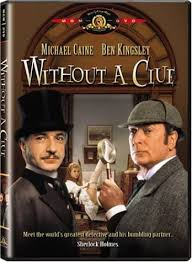 The expectations we bring to a film or a book often shape our reaction to it. Perhaps they shouldn't. I approached Without a Clue without much enthusiasm, I must say. I'd read one or two lukewarm reviews and the idea of a comedy film about Sherlock Holmes didn't excite me. However. the film turned out to be more enjoyable than I'd expected. Conversely, if I'd watched it to admire two fine actors (Michael Caine and Ben Kingsley) tackling a strong mystery, I'd have been disappointed.

The basic premise is that it is Dr Watson, not Holmes, who is the Great Detective. Sherlock Holmes is a stooge, played by an actor called Kincaid whom Watson has hired so that detective work does not interfere with his medical practice. But Watson has now become jealous of his own creation. He wants to dispose of Holmes and star in a series about the cases of 'the Crime Doctor' (was this a nod to the Crime Doctor stories of Conan Doyle's brother-in-law E.W. Hornung, I wonder?)

Caine and Kingsley play Holmes and Watson with considerable gusto, and this helps to keep the story swimming along, despite a mystery plot that I found less than gripping. Their investigations bring them into contact with a beautiful young woman (Lysette Anthony) and at one point they visit the Lake District - hooray! In due course it emerges that the criminal scheme they are trying to fathom is the work of Professor Moriarty (Paul Freeman, another very capable actor). There's even a small part for Peter Cook.

The story rolls along in a good-natured if rather protracted way, accompanied by a soundtrack written by Henry Mancini. The premise deserved a stronger screenplay, but overall the film exceeded my admittedly modest expectations.

Hi Martin. Agree wholeheartedly. Without Caine and Kingsley I think it would have been completely forgettable but it's fun (and fairly forgettable). If you haven't seen Billy Wilder's The Private Life of Sherlock Holmes then you haven't lived etc. etc. A wickedly beautiful parody, pastiche, homage and absolutely amazing to look at too. The oddest Holmes has to be Roger Moore in Sherlock Holmes in New York (with Avengers' Patrick Macnee as Watson). It's weirdly enjoyable even though you keep telling yourself this is so wrong.
I do love the old Rathbone/Nigel Bruce serial of the 40s (which are often very witty) even though it has little to do with Conan Doyle.

Thanks, Arkady. I share your enthusiasm for the Rathbone movies, which kick-started my interest in Sherlock when I was very young. The Wilder film is high on my list to watch!