Bodies from the Library and other online events 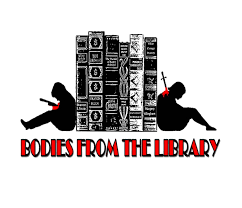 When the pandemic began, I'd never even heard of Zoom, let alone be.live or all the other ways of conducting online events. But now I must have taken part in upwards of sixty online events, plus a variety of podcasts (including one for the admirable literary journal Slightly Foxed which will be aired in June). Thankfully, the technology has been sorted out by other people and I'm very grateful to them. As a result I've been able to connect with crime readers not just in Britain but in various other places, with virtual events being run from the US, Australia, India and so on. It's been a great boon in difficult times, with two books (Mortmain Hall and Howdunit) published but no live launches or supporting events.

There are, of course, pros and cons to online events. Inevitably you don't get the same buzz that comes from a live festival or library gig. The personal connection is much more limited - a real drawback. But it's there to some extent, and that's far better than nothing. And you do save a lot of travel time - as a result, I've been able to write more than ever before during the past fifteen months. Further, an online event enables you to reach people who wouldn't be able to attend a live event - and for this reason, I suspect that an online ingredient is likely to become a component of many events and festivals in the future, even when all restrictions are lifted. People with disabilities that restrict their ability to attend in person, for instance, should enjoy much greater access to events than in the past.

Saturday was especially busy. Bodies from the Library again couldn't be held at the British Library, but this year the organisers put on a virtual version. Congratulations to Mark Green and his colleagues for all their hard and efficient work behind the scenes. The event opened with a panel in which I discussed Howdunit with Alison Joseph and Kate Ellis, and this was promptly followed by a conversation between Christine Poulson and myself about Anthony and Peter Shaffer. I also took part in a discussion at the end of the afternoon, on the question of whether every fictional detective needs a Dr Watson.

But in between times, I was also taking part in a murder mystery weekend splendidly organised by Sara West. I spent rather more than an hour fielding questions from attendees about Howdunit and the craft of crime writing. It was a lot of fun and another great chance to promote a book I'm really proud.of. Howdunit was recently nominated for a fifth award, the Anthony, which is a definite bonus.

And the reach of online events was underlined by the number of emails I received after I zoomed out (feeling, it has to be said, rather weary - I do find online events more tiring than live ones, perhaps because of my innate technoangst) of my final panel on Saturday afternoon. The reaction makes it all worthwhile.

Martin. It was great to have you speak at Bodies From The Library and thank you for your kind words about our back-stage (for which read "off-screen") team.

Thanks, Mark. Not just this year, but every year, you and the rest of the gang have been an absolute delight to work with and I very much look forward to seeing you for a chat and a drink in the bar (of that Premier Inn, no doubt, if John gets his way!) next year