The Neighbor aka Last Days of Summer - 2018 film review 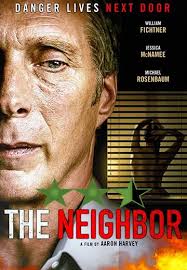 The Neighbor is a film released in 2018 which is also known as Last Days of Summer. Both titles are rather low-key, perhaps excessively so, and this rather reflects the mood of the film itself. The story is one of those which involves crime but which is perhaps better described simply as a drama. It's not a whodunit, for sure, and the mystery is really just about what fate holds in the store for the central character.

That person is Mike Prentis, a man in late middle-aged, married with a son, who works from home as a technical writer. Mike is a mild-mannered chap, almost an everyman figure. If that doesn't sound exciting, well, excitement isn't what this film is all about. It's a study of character and although the story is slight - no elaborate plotting or cluefinders here! - it's carried along by the superb performance of William Fichtner as Mike.

I don't know much about Fichtner, but I was very impressed by his nuanced reading of an essentially decent man who becomes increasingly obsessed with his pretty neighbour Jenna (Jessica McNamee), who has moved in next door with her outgoing and extremely irksome car salesman husband Scott (Michael Rosenbaum). Mike has, in many ways, a very good life. His wife Lisa (Jean Louisa Kelly) is attractive and intelligent, a teacher with great commitment to her work. Kelly does well, however, to convey Lisa's essential selfishness and coldness. She complains, quite reasonably, that Mike doesn't show great interest in her work, but fails to recognise that she is even less interested in him. Their son Alex is closer to her than to Mike, and although Mike is a pleasant guy, we have a sense of his increasing isolation.

Mike becomes concerned that Scott is abusive towards Jenna, but although he tries to protect her from harm, matters are complicated by the fact that he fancies her like mad. He wants to do the decent thing, but from an early point in the story, one worries that it won't end well. This is a sad film, a sobering story of disintegration. Even though the plot is thin, I thought it well-made and conspicuously well-acted.