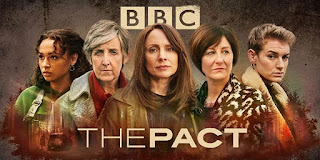 Tonight saw the first episode of a new BBC Wales TV drama series, The Pact, written by Pete McTighe. It got off to a good start. The story is in six parts and I'm really hoping that there is enough material to fill them all as effectively as the first episode. All too often these six-parters begin to sag, but with any luck it will be more like the brilliant (and equally down to earth) Happy Valley than Finding Alice.

There are plenty of things to like about The Pact. The first is the setting. Wales is a country I've loved since I was a small boy, and when I took part in the recent Gwyl Crime Cymru Festival, I was reminded of how much I've missed. (And that reminder has prompted me to book a short break in north Wales later this week, to celebrate the latest easing of lockdown - while I have the chance!) I didn't recognise the locations - apparently the wood and lake scenes were filmed near Merthyr - but they were certainly evocative.

The story concerns a group of four women who work in a brewery. One of them, Anna (Laura Fraser) has applied for promotion to a supervisor's job. Unfortunately, the youngish owner of the brewery, Jack, (Aneurin Barnard, in a very different role from the supportive husband in Cilla) is horrible to everyone. There is some good character drawing in The Pact, but it doesn't extend to Jack, who is an almost cartoonish bully. Maybe future episodes will present a more nuanced picture of him; I hope so. He's also one of those bosses, overwhelmingly more prevalent in TV shows than in real life, who never seems to have heard that we've had a law of unfair dismissal since 1972.

When Jack commits one misdemeanour too many, the gang of four decide to teach him a lesson. Unfortunately, it goes badly wrong and they find themselves committing a series of colossal misjudgements on the way to forming a conspiracy of silence. It seems unlikely to work well and I'm interested to discover precisely how things unravel.