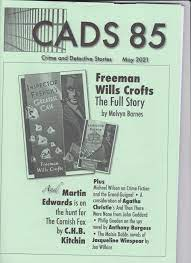 I've often extolled CADS on this blog. I've read every single issue, and it's now up to number 85. The editor, Geoff Bradley, has done a brilliant job for decades and crime fans, especially fans of traditional mysteries, have much to thank him for. I've contributed articles from time to time since issue 6, but for me it's a real pleasure to make fresh discoveries as a reader - which happens with every issue. There are so many riches in the back issues that I often find things I've forgotten when browsing through them, or which make more impact second time around, for example because I've now read the book or author under discussion.

The latest issue is CADS 85 and it's full of interest. I wrote one of the articles - it's called 'Hunting The Cornish Fox' and it concerns C.H.B. Kitchin's novel of that name, and some interesting letters he wrote about it. A niche subject, admittedly, but one that I found really fascinating for the light it cast on one author's thoughts about his book.

There is a long and eclectic list of contributors, including - to name but a few - Melvyn Barnes, Philip Scowcroft, Philip Gooden, Barry Pike and Kate Jackson. Liz Gilbey writes about P.B. Yuill, an author I really like, and Marvin Lachman's very well researched obits column is informative as always, if occasionally touched with melancholy. I wasn't aware, for instance, that Jerry Oster and Anthony Quogan, two pretty good and very different writers, had both died.

One of the contributors is Professor Michael Wilson, who writes about one of his specialist subjects, Grand Guignol. It's good to see an academic writing in a very accessible way for a magazine like CADS and I hope to see further contributions from Mike and from other academics in issues to come. There is no online version of CADS, but if you'd like to buy a copy, contact Geoff at geoffcads@aol.com