A String of Pearls by Margaret Wilson and Helen Shaw 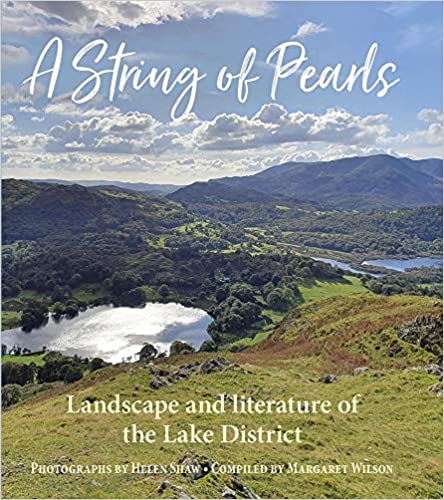 A while ago, I was intrigued to receive a request to grant permission for an extract from one of my novels to be reproduced in a new non-fiction book. Agreement was reached, and I've now received the finished product. This is A String of Pearls, compiled by Margaret Wilson with photographs by Helen Shaw. The subtitle is Landscape and literature of the Lake District and it's published by Merlin Unwin. I'd describe it as a coffee table book of the most attractive kind, sumptuously illustrated and appealing to anyone who is, like me, interested in books and the Lakes.

I found it particularly refreshing to have the chance to leaf through the book and luxuriate in some of the images, given that it's been impracticable for me to visit the Lakes for most of the last eighteen months. I did manage a brief and hugely enjoyable return trip last summer, which enable me to revisit some of the settings for The Crooked Shore (which will appear in July) but I hope to get back there for a longer visit before too long. In the meantime, the book has brought back some pleasant memories.

As one might imagine, the usual suspects are present and correct. So we have Wordsworth, Southey, Coleridge, Ransome, Potter, and De Quincey - naturally - as well as modern writers of note including Melvyn Bragg, Sarah Hall, Alfred Wainwright, and Hunter Davies and his late wife Margaret Forster. But there's an eclectic mix, with Bill Bryson, Chris Bonington, and Ian McEwan also featured.

The chosen extract from my work was a light-hearted passage from The Hanging Wood, illustrated with a lovely picture of Derwent Isle on Derwent Water. The other crime writers featured are Reginald Hill and Val McDermid, with extracts from two of their best books, The Woodcutter and The Grave Tattoo respectively. I was also pleased to see a piece from a much less renowned novel, High Wray by Ken Hughes. This was filmed as The House across the Lake, which I reviewed back in 2017.

All in all, then, a nice book to leaf through and one that I'm glad to be part of.