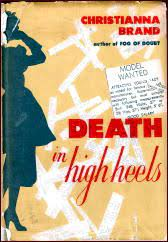 Christianna Brand's career as a crime writer began with Death in High Heels, first published in 1941. My copy is the American first edition, which didn't appear until 13 years later, by which time Brand was very well-established, thanks to books such as Green For Danger. She was a generation younger than the first Queens of Crime, but she worked very firmly within the Golden Age tradition. Like Edmund Crispin, she was swimming against the tide of fashion, given her interest in intricacy of plotting rather than psychological complexity and suspense, but again like Crispin, she has always had a loyal band of admirers.

I've been a fan of hers ever since I read Green For Danger, but it's taken me a long time to read her debut. I confess that I started reading a paperback edition some years ago and lost enthusiasm to such an extent that I never finished it. Second time around, I persevered, and was glad I did so. There's no doubt that it's an apprentice work. The story makes a bright start, and then sags. But there are many touches typical of Brand.

These include a 'closed circle' of suspects - people working in a dressmaking business. Famously, Brand worked in just such a business and (so it is said) based her victim on a colleague from real life. She also shows her ability to come up with a complex plot with the potential for multiple solutions. The detecting is undertaken by Inspector Charlesworth, who appeared in two later books.

In some ways, the best part of the book is the early description of life in the dress shop, before the complications are piled on. The less said about the characterisation of a gay member of staff and a charlady (patronisingly called Mrs 'Arris throughout) the better. But there are some neat plot twists. Brand would do better in her later books, but this one tells us quite a bit about the era in which it is set.

Yes, Green For Danger and Tour de Force are definitely better than this one. Last year I tried to read Cat and Mouse but couldn't even get halfway through. Brand is one of those authors that I just can't pick up her books and read anytime. I have to be in a certain mood to read her. Hope to try again soon with Fog of Doubt.

Thanks, Ted. I read Cat and Mouse many years ago but can't remember much about it. I'll try it again one of these days.

Cat and Mouse is a disconcerting book as it reads like nothing else Brand had written before or would write afterwards (at least under her own name) It is also surprising that Symons, not much of a Brand fan, expressed so much enthusiasm about a book that while different from Brand's usual neo-GAD vein didn't fit in his "crime novel" model either. It has many good things going for it (the shoes in the attic have to be one of the cleverest clues I've ever seen) but I struggled with some of the dialect, which made the reading less of a good experience than it should have been.

Thanks, Xavier. I really must go back to it before long!