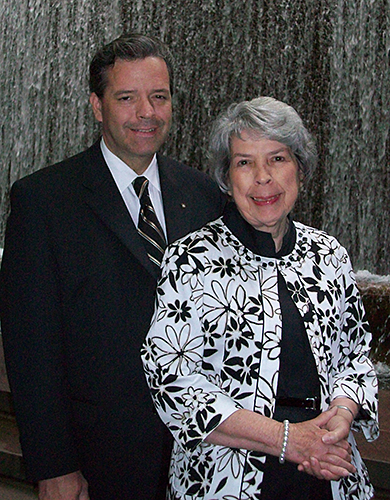 I was deeply saddened yesterday to learn of the death of Caroline Todd, a delightful person and a gifted writer in collaboration with her son Charles. I've greatly enjoyed Caroline's company, along with that of Charles and her daughter Linda, on many occasions, both in Britain and the United States, and I was in touch very recently to pick their brains about the pros and cons of collaborative crime writing for a course that I'm working on right now.

I first became aware of the name of Charles Todd (the name under which the mother and son duo wrote) twenty-five years ago, when I delighted in their first historical mystery featuring Inspector Rutledge, A Test of Wills. The popularity of that book paved the way for a long and successful career. Their love of England shone through in their writing: it's not easy to capture the sense of a foreign country in a long series of novels, but they achieved this thanks to meticulous research and a great deal of empathy. 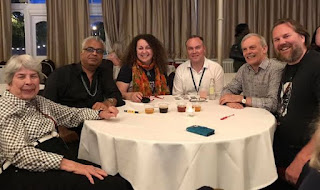 The first time I had a long conversation with Caroline was, as far as I can remember, in Baltimore, at the 2008 Bouchercon, when we appeared on a panel together. After that there were many enjoyable encounters. We were, for instance, on a quiz team together at Harrogate a couple of years ago (above photo), and Caroline also took part in 'Forgotten Authors' panels at CrimeFest. I also remember a memorable dinner at Malice Domestic in 2014, along with the actor-writers Melodie Johnson Howe and Kathryn Leigh Scott, while Charles and Caroline were guests of mine at a table at the Agatha awards banquet a couple of years later when The Golden Age of Murder won the prize.

Four years ago, when I agreed to give a talk in Grasmere to a group of Americans visiting the Lake District, I was surprised and delighted to find that their number included Caroline and Charles, who were on another research trip - as I say, they researched expertly and extensively together. I've also had the pleasure of including their stories in anthologies; their contributions were always entertaining and highly professional. 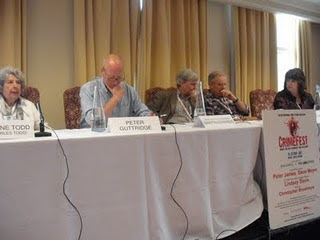 All our get-togethers were happy ones, because Caroline was a woman of charm, intelligence, and kindliness. She and Charles were due to be guests of honour at the Anthony Awards last night and warm tributes were paid. In particular, Hank Philippi Ryan spoke very movingly about Caroline's personal qualities and literary gifts in a memorable and fitting tribute. I shall miss her and my sympathies go to her family and particularly to my dear friends Charles and Linda, whose loss is so great.

Caroline will be very missed. Her charm and sincerity was so appreciated!