Forgotten Book - A Sort of Virtue 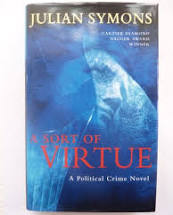 Julian Symons' final novel is the least-discussed of all his books, in part no doubt because it was published after his death. A Sort of Virtue is an oddity in a number of ways, not least because it marks the second appearance of the Scotland Yard man Hilary Catchpole. So Symons, the scourge of series characters, ended his career with a mini-series, albeit of just two books (Hilary previously appeared in Playing Happy Families).

Another curiosity is that this novel is presented as 'a political thriller', a type of writing with which Symons wasn't closely associated. He wrote the book during the years of the John Major government, and Major is given a name-check in the text, but has retired from the fray before the events of the story take place. There's quite a lot in the story about the inner workings of government, but this material is presented in a rather detached way and I have to say that I didn't get any impression of inside knowledge about the workings of government.

The story begins with the discovery of a murder. The dead woman is Lily Devon, a high-class prostitute. An initial police investigation is manipulated by outside forces, and duly bungled. An attempt to pin the killing on an innocent man fails, but only because Hilary - of all people - can give him an alibi. It then falls to Hilary to find out what really happened.

Julian Symons wrote this book at a time when he was suffering from cancer. The novel is longer than most of his books and I wonder if, had he lived, he would have edited it more extensively. I like to think so, because the story is meandering, to say the least. Characters flit in and out of the story and for long periods, not much happens. Quite a lot of the dialogue and description. particularly in relation to minor characters, seems dated by the standards of the 1990s, never mind today.

Because he was a very good writer, there is still some interest in many of the scenes, but the magic that I associate with Symons at his best is absent. There is one minor character, a rather typical Symons figure, who seems enigmatic and who I felt was sure to play a key part; but in the end the explanation for his mysterious activities was anti-climactic in the extreme. The basic murder mystery plot is okay, but overwhelmed by endless digressions that aren't especially interesting. I really, really wanted to love this book, but I can't deny that I found it a disappointment. I'm afraid it's one for the Symons completist only.

This is one of the four Symons novels I haven't read and was actually considering putting in an interlibrary loan request for it. After reading your review I've decided to read A Man Called Jones instead. Thanks for the review because I've always been curious about this one. Maybe I'll get around to reading it in a year or two.

I definitely wouldn't want to put anyone off reading it, Ted. It's not without interest and it's written in Symons' characteristic style. But I don't want to give the impression that it's a lost masterpiece. Death's Darkest Face, for instance, is much, much better.