Forgotten Book - No Through Road 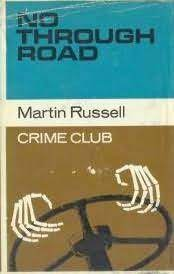 Martin Russell was a capable crime novelist who enjoyed a long career yet remained relatively low-profile. His retiring personality perhaps helps to account for this. In addition, although he wrote a short series featuring the journalist Jim Larkin, he concentrated on stand-alones which were published consistently over the years in the Collins Crime Club but seldom appeared in paperback.

He made his debut with No Through Road in 1965 and it's an intriguing and unusual crime novel. The first part of the story is told in the first person by Arthur Whitlock, who is driving north and clearly escaping from something - but what? Later sections are told in the third person as he comes into contact with the police. It's not easy to say much more about the storyline for fear of giving spoilers.

Whitlock is a meek individual but we learn he's enjoyed considerable success (although rather fleeting) as a playwright. He has been besotted with his much younger wife Gwenda, but the marriage has proved disastrous in various ways. I detected the influence of Simenon on the writing - something not so evident in Russell's later novels, or at least those I have read.

This is quite an ambitious novel, and I can see why Elizabeth Walter, the long-serving Crime Club editor, picked it up. Despite a good deal of unevenness, there are some interesting ideas in evidence. That said, I don't think the novel can be accounted a great success - as Kirkus Reviews said, it's a bit too strident, but it does 'manage a fair amount of pace and pressure'. The psychological aspects of the story didn't strike me as entirely convincing, and the same could be said of the police characters, but there are plenty of glimpses here of the capable writer that Russell would become.

Labels: Martin Russell, No Through Road