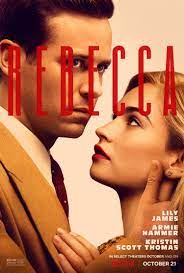 Ben Wheatley's decision to remake the Hitchcock classic Rebecca was, depending on your viewpoint, courageous or foolhardy, but he's been quite clear in interviews that his focus was on filming Daphne du Maurier's novel rather than reinterpreting the Master of Suspense and I think that was sensible. His film is no masterpiece, I'm afraid, but it ranks as solid entertainment.

In some ways, the best part of the movie comes in the early scenes, as we find the heroine (Lily James, very well cast) oppressed by her dreadful employer Mrs Van Hopper (Ann Dowd, who is terrific) and entrancing wealthy and moody Maxim de Winter, who is coming to terms with the death of his wife, Rebecca. Maxim is played by the American actor Armie Hammer, and this is a casting choice that I found odd and unsatisfactory. Maxim's weird mustard-coloured suit made a more immediate impression on me than the man himself. It would be absurd and unfair to compare him to Laurence Olivier, but I feel sure there must have been stronger candidates for the tormented character of Maxim.

The main action then shifts to Cornwall, and the de Winter house, Manderley. Filming took place in Devon rather than Cornwall, apparently, and more than one house was used to create the Gothic mansion where Rebecca's ghost figuratively stalks the corridors. We're introduced to the housekeeper, Mrs Danvers (one of the great villains in fiction) who was besotted with Rebecca and hates her successor. Kristin Scott Thomas tackles the role with icy zeal, and is compelling throughout. Alas, Sam Riley is far less memorable as Jack Favell than was George Sanders in the Hitchcock version.

The script is workmanlike, but given the strength of the source material, one would have hoped for more. There's a 21st century attempt to make Maxim's new wife more active and less of a victim in the later scenes, but it doesn't work very well. I am definitely not one of those who thinks that Rebecca shouldn't have been filmed again and I did find this version enjoyable viewing. But it's simply not as good as it might have been.