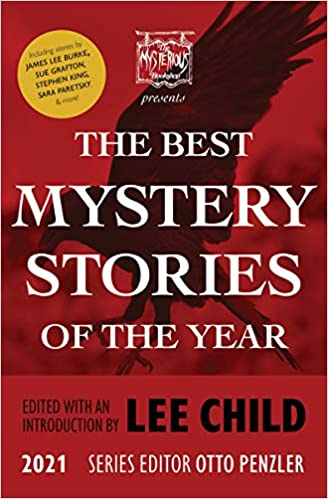 I was chuffed, to say the least, when my story 'The Locked Cabin' was chosen to be included in The Best Mystery Stories of the Year 2021. And it's good to learn that the book has been given a starred review in Kirkus. This is what they have to say:

'Editor Child, series editor Otto Penzler, and their colleague Michele Slung team up to offer 20 gems from 2021 in the first volume of a new series.

Many of this year’s best follow a familiar road: pitting a rugged male hero, often with military street cred, against the bad guys. Doug Allyn’s “30 and Out” features an Afghan War vet who hunts a colleague’s killer; Jim Allyn’s ex-Army police veteran worries about being teamed with an unreliable partner in “Things That Follow.” But a surprising number include less traditional crime busters. A young man entranced with the Irish language is the gentle hero of Andrew Welsh-Huggins’ “The Path I Took.” Sara Paretsky’s V.I. Warshawski, a familiar female gumshoe, makes a welcome appearance in “Love & Other Crimes” along with the female proprietor of Wilde Investigations in Janice Law’s “The Client.” Moms get into the act in Alison Gaylin’s “The Gift” and Tom Mead’s “Heatwave.” So do new friends, in Martin Edwards’ “The Locked Cabin,” and frenemies, in Jacqueline Freimor’s “That Which Is True.” And in a startling tribute to the power of sisterhood, Joseph S. Walker shows how quickly female strangers can bond if the need is urgent in “Etta at the End of the World.” Women take starring roles on the wrong side of the law in John Floyd’s “Biloxi Bound” and Joyce Carol Oates’ “Parole Hearing, California Institution for Women, Chino, CA." Child’s selections seem especially appropriate for 2021, a year that promises change on so many fronts. The only exception is the unexplained bonus reprint, Ambrose Bierce’s “My Favorite Murder,” a bitter tale of a man who revels in the sadistic murder of his uncle. That one belongs to 2020.