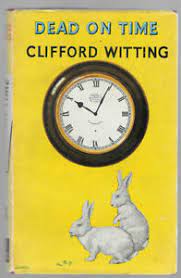 Nigel Moss is a connoisseur of vintage detective fiction who has recommended a number of interesting writers to me. He was the very first person to encourage me to read John Bude, about a decade ago - some time before the British Library commissioned me to introduce The Cornish Crime Murder and The Lake District Murder. And he was also the first to urge me to give Clifford Witting a try. I made a slowish start with Witting, but the more I've read him, the more his agreeable writing has grown on me.

Dead on Time, first published in 1948, is a good example of his work. It's a murder mystery that isn't lacking in ingenuity. I read this book immediately after finishing a decent effort by John Rhode. One similarity is that in this book, like a number of Rhode's, the good old English pub plays a prominent part in the storyline. The Blue Boar in Lulverton is the scene of the fatal poisoning of Jimmy Hooker, and a plan of the ground floor of the inn is duly provided.

The criminal's modus operandi here is crafty enough to be worthy of Rhode, but its strength lies in its simplicity, whereas Rhode's schemes are often highly complex. As a general rule, Witting scores over Rhode in terms of characterisation and prose style.There's a lightness, a touch of good nature about his storytelling (as with Bude and indeed George Bellairs) that has genuine appeal. Rhode was capable of pleasing touches of humour, but he was much more prolific than Witting, and such industry, although admirable, isn't conducive to elegant writing.

The first half of the book is very enjoyable, but the story becomes thrillerish and less engaging prior to a good climax and the revelation of the pub killer. Not a masterpiece, then, but a decent story, well worth reading. And yes, the rabbits on the dust jacket cover are relevant to the story...

Looks like this one will be republished by Galileo Publishers in June of this year.