My People And Other Crime Stories - Liza Cody 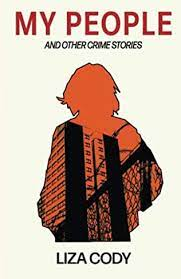 Liza Cody is one of a particular group of crime writers whom I admired long before I met any of them. This group (other members included Andrew Taylor, Frances Fyfield, Ann Cleeves, Peter Robinson, and Ian Rankin) wrote varied types of mystery fiction but they had something in common: they were young British authors who published debuts in the genre during the 1980s which struck me as appealing and exerted some influence on my own thinking and writing while I was working on the first Harry Devlin novel. There were older writers who influenced me as well, of course, but this was a group of people of my generation, more or less, who were setting a high standard.

Looking back, I think that, whatever other mistakes I've made in my writing career, I chose my unwitting mentors well. It's been a great joy to me to meet many of the authors I admired back in the 1980s and still to be able to count quite a lot of them as friends. Of the people I've mentioned, Liza was the first to be published and to make a big impact. Although her first series focused on Anna Lee, a female private eye, and Harry Devlin was - and is! - a  male lawyer, I tried to learn from her style of writing. She never wastes words, but she is strong on insight and dares to be a bit different, qualities I relish.

When I wrote my very first Harry Devlin short story and submitted it for an anthology Liza was co-editing, she turned it down, but with comments that I found thought-provoking and which meant that I not only published it elsewhere, but also felt moved to write several more short stories about Harry. Many years later, I was thrilled when she wrote a story connected with Anna Lee at my request for a CWA anthology.

That story, 'Day or Night', appears in Liza's new book, My People and other Crime Stories, published by Gatekeeper Press. So does another story that she wrote for a book I edited, the excellent 'Ghost Station'. The collection begins with a foreword - nicely titled a 'foreword of warning' - which is as worth reading and as insightful as all her work. She discusses the 'toxic environment' in which authors are working at present and the dangers of online bullying and the thought police. Her concern is that 'the fight against bigotry seems itself to have engendered bigotry.'

Liza's range and originality is on display in this collection, with intriguing stories ranging 'A Hand' to 'I Am Not Fluffy'. In an afterword, 'Notes from an Untidy Desk', she makes kind mention of me as well as other editors, but I've said enough to explain why regardless of that, as a long-term fan, I'm always keen to read her work. Her individualism is a great strength and anyone who likes interesting crime writing that, every now and then, gives you pause for thought as well as a chance to listen to fresh and sometimes challenging voices, will find as much to savour in this book as in her novels.

Labels: Liza Cody, My People and other Crime Stories