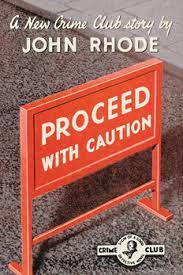 Fashions change in crime writing, as in everything else. I doubt very much whether anyone today would give their crime novel the drab title Proceed with Caution. Yet that's just what John Rhode did, back in 1937. (His American publishers called it Body Unidentified, which is at least an improvement.) And it's even less likely that a modern crime novel's opening words would be: 'Things happen like that,' said Superintendent Hanslet, 'There are times at the Yard when things are as dull as ditchwater.'

After this soporific start, things can only get better. Thankfully, they do. In the prologue, Dr Priestley is told about two distinct cases being investigated by his Scotland Yard chums Superintendent Hanslet and Inspector Waghorn respectively. Both detectives are convinced that their cases are open and shut affairs, but of course three things are entirely predictable. First, the mysteries are much more complex than they seem at first. Second, they will turn out to be connected. And third, our armchair amateur detective will be quicker on the uptake than the professional cops.

Hanslet's case involves some valuable diamonds that have gone missing, along with a Hatton Garden jeweller. Waghorn's case is a murder mystery of a Gothic nature, although it wasn't Rhode's style to make the most of the bizarre trappings of a case involving a deserted motor hearse and a body rendered unrecognisable after being dunked in a tar boiler used for road repairs. The tar boiler murder concept would, I feel, definitely suit a Rachel Savernake story, but Rhode is more concerned with timetables, alibis, and disguises than the vivid evocation of atmosphere.

I've realised belatedly that the best way to read Rhode is to rattle through his stories quickly. This is so even though I like to try to figure out the answers to Golden Age whodunit mysteries and also to try to understand how the author crafted his puzzle. Quite early on, I realised who was the villain of the piece, and rather than get bogged down in the minutiae of travel times which occupy a sizeable portion of text, I took pleasure in the way Rhode set about pulling the wool over the eyes of his readers. We never get to understand the mindset of the murderer - the motive is taken for granted - and this lack of interest in criminal psychology is one of Rhode's weaknesses, while the book is wrapped up with almost unseemly haste once the good doctor has explained things.. But there are plenty of nice little touches, and overall I'd rate this book as among the best Rhodes that I've come across.

Dull titles were something of a trademark for Rhode, such as The Paper Bag and By Registered Post. (The latter may have the most unfeasible impossible crime ever.)

I haven't read either of those, Jonathan, but you're dead right about his titles.