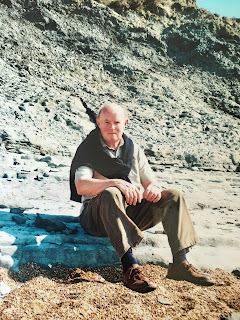 I'm sorry to report the death of another stalwart of British crime writing from the 1980s and 90s, John Malcolm. That was the pen-name of John Malcolm Andrews, who served as Chair of the Crime Writers' Association in 1994-5. I got to know John in the early days of my writing career and we had numerous enjoyable conversations. He was a quiet, pleasant man who was clearly both a capable businessman and a great expert on antiques.

That love of antiques played a central part in his novels. He introduced Tim Simpson in A Back Room in Somers Town (1984) and the Tim Simpson books were a staple of the Collins Crime Club, a first class list with a very good editor, Elizabeth Walter. John inscribed a number of copies of his books for me, and I found them sound, capable pieces of work, good to read even if (like me) one knows next to nothing about antiques.

John also published two non-series novels which I haven't read, as well as several non-fiction books about antiques and many articles. Born in 1936, he was educated at St John's College, Cambridge, where he studied engineering. His business career meant that he travelled extensively and he worked as a management consultant as well as a machinery broker.

I haven't seen John in person for a long time but the two last stories that he published both appeared in anthologies that I edited; the most recent, 'The Marquis Wellington Jug', appeared in Motives for Murder. He was diagnosed with Parkinson's in 2004, but we corresponded many times and I was delighted when he agreed to contribute an essay to Howdunit. In fact, he was one of the first Detection Club members to do so, and took a keen interest in the book's fortunes. I imagine that it was the last piece he wrote concerned with the crime genre. Ultimately he succumbed to cancer on 30 October this year. My condolences to his widow Geraldine and his son Sam. I shall remember him with affection as a good companion who was always willing to give some time to a young fellow crime writer.

Really quite a shock to discover that John Malcolm has passed away and so recently too. It was only in November running into mid December 2021 that I re-read all of his Tim Simpson novels (in date order) and his two with Bill Franklin. And it is only this evening that I've discovered his two most recent ebooks - which I've not managed to read but am eager to do so now that I know they exist. John's crime fiction has provided me with many hours of pleasurable reading and immeasurably increased my knowledge of antique furniture and Modern British art. What a legacy and what a sad sad loss. David Pearcy (formerly National Police Training, Bramshill).

Thanks, David. Yes, John was an entertaining writer and he is much missed.