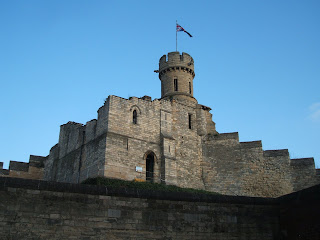 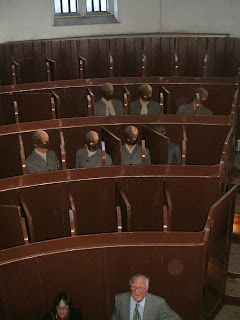 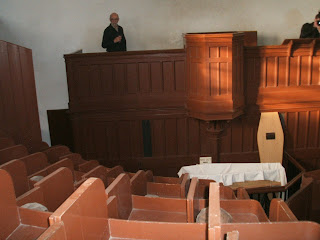 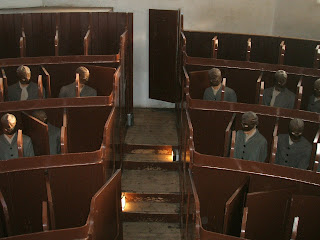 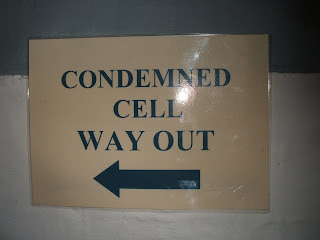 At the CWA annual conference in Lincoln, we had a reception on the Saturday evening, before dinner, at the Victorian prison in Lincoln Castle. This was a fascinating place, and we had a chance to look around the condemned cell and elsewhere, nerves appropriately steadied by a glass of wine paid for by the admirable Flambard Press.

Here are a few photos, but I’d like to draw your attention in particular to the prison chapel. This is the only surviving example in Britain of a chapel where the ‘separate system’ was operated. In the mid 19th century, there was a vogue for keeping prisoners completely isolated. They were denied all contact with each other, using solitary cells, a rule of silence – and hoods.

The pews in the chapel were specially designed so that the prisoners could only see the chaplain in his pulpit. Each prisoner stood, or sat, in a wooden compartment which was locked before another prisoner was admitted. Condemned criminals sat at the back, women at the front and debtors to the side. Sitting was actually not easy, since the ‘seats’ were slanted rather than straight – anything to deny comfort, I suppose (and anyone unwise enough to fall asleep mid-sermon would slide on to the stony floor...)

Even in those days, it was recognised before long that this was an utterly inhumane way of dealing with people, and the ‘separate system’ was abandoned. But seeing it was a reminder that being ‘tough on crime’ means very different things to different people at different times.

smashing post. is it in Oxford where an old prison has been converted into a 5 star hotel?

Thanks, Paul. I think you're right, and that it featured in an episode of Lewis a while back.

I didn't even know that there was a Lewis series, I'm so far out of the loop here in Poland!

You get a name check in Broken Trails BTW.

And here's my contribtion to prison writing !

You are very welcome to visit my prison which is a little more modern if you wish.

The chapel is amazing. Talk about irony. Maltreating people while you preach to them. I wonder why the debtors were off to the side? Perhaps it was felt they didn't need to see as well their sins/crimes being the lesser?

Hi Paul. Lewis is much better than I expected, a really high class spin-off, in the episodes I've seen. However, I have heard that it may not go into another series.
Thanks for the link, by the way!

Jane, I look forward to it - we must at long last arrange the visit!
Eric - couldn't agree more about the irony. A strange place - I had no idea it existed until I walked inside!

Yes, it is in Oxford that there's a hotel that used to be a prison. It's part of the Malmaison chain. The combination of "mal" with "maison" seems appropriate somehow...

Martin, you might enjoy a tour of Eastern State Penitentiary should you visit Philadelphia. You'll see the solitary, individual exercise yards attached to each cell. These, too, date from a time when governors of society believed rehabilitation was best accomplished through solitary contemplation. I suspect this policy drove as many men mad as it saved, if not more.
==============
Detectives Beyond Borders
"Because Murder Is More Fun Away From Home"
http://www.detectivesbeyondborders.blogspot.com/

How interesting! I didn't know they had a system like that--glad it was phased out. It is true that being "tough on crime" morphs through the ages and through different cultures.

Martin, the separate prison you describe is very similar to part of the old Port Arthur penal colony in Tasmania.
The church there had similar segregated seating - the prisoners had to wear hoods at all times when not in their cells. Part of the "model prison" as it used to be called is still there and visitors can experience first hand the type of sensory deprivation prisoners underwent.
http://en.wikipedia.org/wiki/Port_Arthur,_Tasmania This Wikipedia site actually has more information and photos than their official website.

Sunnie, thanks for the link, which I found truly engrossing. The Martin Bryant case was one I covered a few years ago in my one and only true crime book.

What was the title of the book, Martin?

Bryant is in the news again at the moment. Another book has just been published about him. http://tiny.pl/zjqr

Hi Sunnie. It was orginally called Urge to Kill when published in the US, but became Motive to Murder in Australia and Catching Killers in the UK!

Thanks Martin. My library had a copy of it under the Urge to Kill. I've placed a hold in it. I like a bit of true crime.

It was a strange project, very different from anything I've done before or since. But I hope you find something in the book of interest.