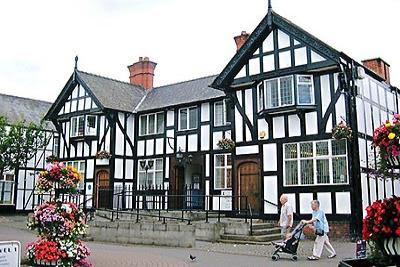 Now that I am only a part-time lawyer, I have the chance to do more fun stuff connected with writing, and I'm keen to make the most of the opportunities that come my way. When I was a partner in my firm, I had to turn down lots of invitations, so although I still need to carve out time for the actual business of writing, I also like to get more involved with related activities. Author talks are an example.

At one time, I was extremely nervous about public speaking. I'm not by nature a public performer, and giving legal lectures in particular I found very hard work. But because I love writing, I find talking about books is easier, and over the years, I've grown in confidence, and become much readier to accept invitations to speak.. And last week I made a wonderfully nostalgic pilgrimage back to the Brunner Library in Northwich. As the picture shows, it's one of the town's black and white buildings, and it was the very first public library I ever joined - first, the children's library, and then (after I discovered Agatha Christie) the adult section.

I am a big fan of libraries,and I'm glad that those in Cheshire, like those in Nottinghamshire I visited recently, are coping well despite the severe financial pressures. Much depends on the initiative and enterprise of the staff, and those I've met in both counties are doing a great job in adapting to the brave new world in which libraries now exist. I tailored my talk to include a few anecdotes about my own experiences of the Brunner Library (named after Sir John Brunner, local benefactor and a founder of the precursor to ICI).

It was grand to see some familiar faces in an audience which filled the room. Among other pleasures, I met a lady with whom, it turned out, I was at school from the age of four. I hadn't seen her since we were both eleven, and it was lovely to make her acquaintance again. She even brought along a photograph taken of us as pupils of the reception class, and we just about managed to identify everyone else in the picture. But it was sobering how many of them have died since then; another reason why it's good to seize opportunities when they come along. I really enjoyed my return to Northwich, and I'm delighted to have been given a chance to wander down Memory Lane - an unexpected benefit of giving an author talk.
Posted by Martin Edwards

Did my Master's in Norwich and I have some very good memories of the place though sorry to say i don't think i ever stepped into the library - something to redress on my next return visit!

Hi Martin, glad you enjoyed your trip down Memory Lane at the Brunner last week. Your talk was greatly enjoyed by your audience too, that’s for sure. Maureen and I loved it. The way you wove your personal story of becoming a crime writer with fascinating insights into the lives of your Golden Age predecessors was masterly, as was your handling of questions, the way you spun out such informative and entertaining replies. Thank you for a great evening, and good luck at the awards ceremonies in America.
Best,
Paul