The Ashes of London by Andrew Taylor - review 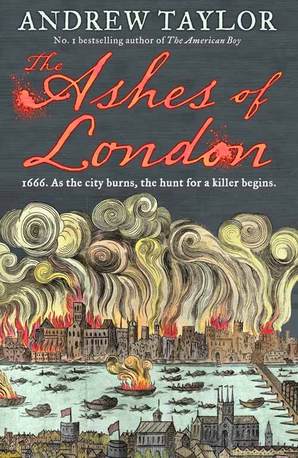 Like many people, I enjoy historical fiction, and the past twenty years or so has seen a massive increase in the number of historical mysteries being written. There are various reasons for this, including the challenges inherent these days in writing contemporary fiction - over-familiarity is a problem, and so is the reach of new technology. But writing a good historical mystery is by no means a doddle.

I doubt it any crime writer, in Britain or elsewhere, has shown such consistent mastery of historical mystery writing in the past couple of decades than Andrew Taylor. Possibly the most impressive feature of his work is his ability to write in compelling fashion about different places and periods of the past. He's equally at home in the rural England of his post-war Lydmouth series and with much more distant times, as in The American Boy. And his Thirties novel Bleeding Heart Square is quite superb.

Now he's turned his attention to seventeenth century London. The Great Fire of 1666 provides a dramatic backdrop to the opening pages of The Ashes of London, a meaty tale in which James Marwood, the son of a supporter of Cromwell, tries to make his way in a world where Charles II has been restored to the throne. A strange encounter with a young woman dressed as a boy introduces him fleetingly to Cat Lovett, who will play a crucial part in the events that follow.

Cat seems destined for a loveless marriage before Fate, in the shape of her odious cousin Edward, intervenes. Soon she is on the run, and we follow her story, and James', as the two young people fight against the legacy of the past, and in so doing become enmeshed in murderous intrigue. This is an intensely readable novel; Taylor has done his research, but wears it lightly. The result is an enjoyable mystery that is intended as the first of a series.
Posted by Martin Edwards

Hello...enjoy your books and reviews ..thank you. Wanted to ask if you have come across the books by MK Coker? They are only available as ebooks , I like them so much. Spare writing, good characters...well thought out plotline ...but I do not ever see them reviewed.

Thanks for this comment. I must admit that the name of M K Coker is completely unknown to me. Time for a Google search....