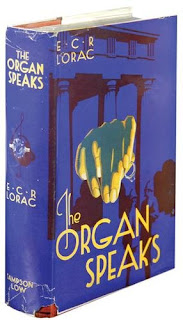 When The Organ Speaks was first published in 1935, Dorothy L.Sayers wrote a rhapsodic review in The Sunday Times, saying that it had an aesthetic value she hadn't previously found in the work of E.C.R. Lorac. She said the story was "highly original, highly ingenious, and remarkable for atmospheric writing and convincing development of character".

High praise, which makes it surprising that the book has disappeared so completely from sight. When copies do surface on the internet or in an auction, they tend to go for high prices. It's taken me a long time, consequently, to track the story down, and see whether it appealed to me as much as it did to Sayers. Now I've read the book, I can see why she liked it, though in my opinion it's  not as successful as the slightly later Bats in the Belfry.

The opening is dramatic. The body of a man called Loudon is founded in a music pavilion in Regent's Park. He has been playing the organ, but has died in the most mysterious circumstances. The cause of death is soon revealed, though. (This is not one of those stories of the type favoured by the likes of John Rhode, where the discovery of a complex murder method comes at the climax.) The challenge for Inspector Macdonald is to find whodunit.

I agree that it's a well-written book, and highly readable. If I were, like Sayers, very knowledgeable about classical music, I might have admired it even more. For me, the whodunit mystery is not particularly impressive, and I'm not sure Lorac played entirely fair in terms of enabling us to deduce the motive. Sayers was less interested in the whodunit aspect of a story than, say, Agatha Christie (or me) and that may be why she valued it so highly. That said, it's definitely worth reading - if you are lucky enough to find a copy.

Thanks for the appraisal; this is one Lorac title I am for ever hunting.

Thanks Martin - I dare say that unless your chum at the BL come to the rescue, we will have to make do without!

Sounds like it might be similar to THE HYMN TUNE MYSTERY by George Birmingham, another murder mystery about a church organist and organ music, which was praised by Barzun and Taylor and which I dutifully went hunting for. It's the only mystery I know of that has a cryptogram that requires a knowledge of reading music in order to break the code. Good news about Lorac's BATS IN THE BELFRY - I bought a copy of that last year but its languishing in one of my many TBR copies. Time to get it out and finally read it this month.