Harry Devlin and Eve of Destruction

It's a long time since I've talked about Harry Devlin on this blog. Harry was my first series character, a lawyer based in Liverpool, and he appeared in eight novels and a handful of short stories. I still get asked if I intend to write another book about Harry, and in a perfect world, I would love to. He's a character I really like, and I am sure there is more mileage in him. But it's not likely to happen in the near future, I'm afraid, because of other pressing projects. 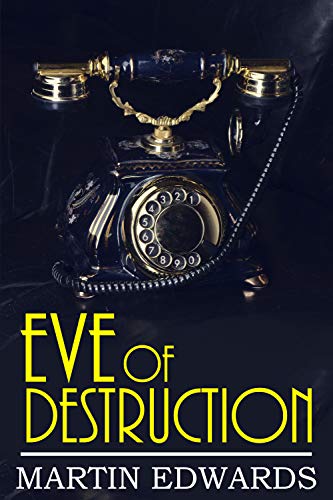 However, I'm delighted that the Devlin chronicles continue to entertain readers, and they have been given a new lease of life by digital publishing and print on demand (two of them were also reprinted as Arcturus Crime Classics a few years ago). But there's been a frustrating gap in the list. There hasn't been a readily available ebook version of the fifth book in the series, Eve of Destruction. The reason for this is to do with complications about the rights. It's all been rather annoying and I've had plenty of emails from readers who have been kind enough to urge me to sort things out.

The good news is that, at long last, this has happened. I'm delighted to say that the novel is now available on Amazon UK, and it will soon be available additionally as a print on demand paperback and in a new hardback format. I'm so pleased about this.

What of the book itself? It was written at a time when I was increasingly keen to introduce Golden Age elements into the series (not that the critics noticed; times were different then....) So, for instance there is a "dying message clue" in the Ellery Queen tradition. The storyline involves a mystery about matrimonial entanglements and mysterious phone messages, and it's a book I really enjoyed writing.  I hope that those who have been patient enough to wait for it to reappear will approve...
Posted by Martin Edwards

You've mentioned that the Devlin books hearken back to Golden AGe plot conventions before. I've always wanted to ask this: Can you tell me if there is a "locked room" or impossible crime mystery in the series? And if so, which one is that? I'll be on the lookout for a copy of Eve of Destruction now that I know it's the "dying message" mystery.

Hi John, thanks. Yes, there is an impossible crime Harry Devlin short story, "It's Impossible". It first apppeared in EQMM and then in Where Do You Find Your Ideas?, a collection of my early stories with an intro by Reg Hill.