Forgotten Book - The Murder of the Circus Queen 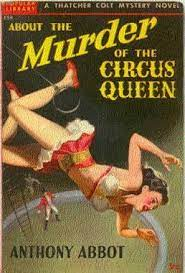 Anthony Abbot published About the Murder of a Circus Queen in 1932 and the UK edition, which dropped 'About' from the title, came along three years later. It's another Thatcher Colt mystery set in New York City, and his 'Watson', Abbot himself, doesn't hold back: 'Not only was it Colt's most baffling case; it was the most glamorous and sinister'. It's certainly vivid and atmospheric, and the story was promptly filmed. I haven't seen the movie, but if Wikipedia is to be believed, the screenplay made many changes from the original, not least the identity of the culprit and the motive.

The circus has come to town, or to Madison Square Garden to be precise, and it's there, in front of seventeen thousand spectators, that an ingenious murder is committed. Colt and Abbot are present, having been warned by the circus owner and manager, Colonel Tod Robinson, that someone is determined to destroy the business.

Abbot captures the breezy mood of circus life, but I was startled by his presentation of one of the circus acts - members of the Ubangi tribe from Equatorial Africa, complete with their own witch doctor. On doing a bit of research, I discovered that there were real life circuses in the US in the 1930s which featured such acts. Today, this seems shocking and exploitative, but on the fascinating GA Detection site, Mike Grost argues that so far as the novel is concerned, Abbot's treatment of the African characters was, by the standards of the time, progressive.

Judged as an American Golden Age whodunit mystery, this is quite a capable piece work. Abbot shifts suspicion around his suspects and comes up with a satisfactory 'least likely culprit'. There are some touches of ingenuity, especially in the method of killing the circus queen. Colt is very much in the tradition of the Great Detective, while the extraordinary stupidity of the District Attorney makes even Inspector Japp look like Hercule Poirot. Very much a period piece.

Of the six Thatcher Colt novels I've read I'd have to say this was my favorite.