Forgotten Book - No Tears for Hilda 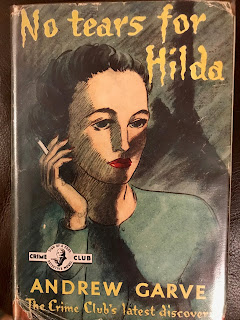 No Tears for Hilda was Andrew Garve's first book to be published by Collins Crime Club. This was in 1950, and Garve was a new pen-name for Paul Winterton, a journalist who had previously published crime novels under the name Roger Bax (he'd later write a few books under another name, Paul Somers). Garve novels would appear regularly until 1978, when Winterton was 70. After that, he retired from the scene, although he lived until just short of his 93rd birthday.

Garve was evidently an interesting individual, a member of the Detection Club and a founder member of the CWA. He stood for election to Parliament in 1931 as a Labour candidate, but since that was the year that Labour were wiped out in a landslide, his political career never got going. It's not easy to find out much about his personal life, though I understand that he wrote a (regrettably unpublished) autobiography. Signed Garve books are hard to come by, and when I came across his personal copy of this title on eBay, I was keen to snaffle it. Now I've read it, I'm glad I did.

This is one of those novels in which a man is charged with murder, but someone close to him insists that he is innocent, and tried to prove it. A familiar scenario, but Garve handles it with a touch of originality, focusing on the psychological make-up of the victim. Although Francis Iles had focused on a 'murderee' almost twenty years earlier, in his extraordinary novel Before the Fact, Garve's approach is very different. The setting and storyline are in keeping with the rather grey mood of the post-war austerity era.

George Lambert's wife Hilda is found dead. At first sight it looks as though she has gassed herself, but it's soon evident that someone killed her. George appears to be the only suspect. He has no alibi, while an affair with a young nurse gives him a motive. His war-time pal Max Easterbrook can't believe that good old George could have committed such a crime. But there are no other suspects.

To find the truth, Max needs to learn more about Hilda's personality. It soon becomes evident that nobody did shed any tears after her death and Garve's attempt to present a rounded psychological portrait of an unpleasant woman is interesting if not, to my mind, wholly successful. But Max's search for the real culprit is interesting and Garve's smooth and accessible prose style kept me turning the pages.