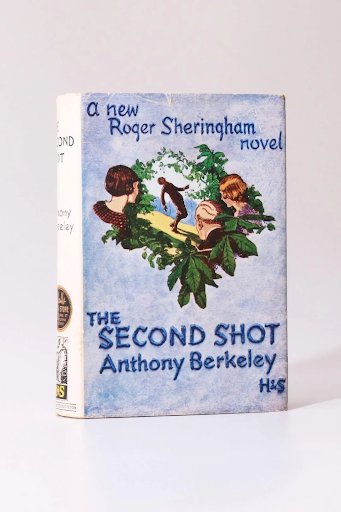 Anthony Berkeley's The Second Shot is rare if not unique among detective novels for being more renowned for its preface than for the substance of its story. In what is really an extended dedication to his literary agent, the legendary A.D. Peters (whose former wife Berkeley married not long afterwards), he argued that 'the detective story is already in process of developing into the novel with a detective or crime interest, holding its reader less by mathematical than psychological ties.' This opinion was quoted with approval by Julian Symons in Bloody Murder and I agree that Berkeley was spot on.

Symons pointed out that in fact this particular novel did much less to demonstrate the point Berkeley was making than did his first Francis Iles book, Malice Aforethought. Again, I agree. Nevertheless, it's a distinctive effort, a Roger Sheringham mystery narrated by Cyril Pinkerton, although Pinkerton certainly isn't a Watson-character. In fact, he's the prime suspect for the murder of loathsome Eric Scott-Davies.

Berkeley's ideas about crime, punishment, and justice were invariably as interesting and often as controversial as his opinions (and he was never short of opinions) about the crime genre. This novel was, along with Gladys Mitchell's Speedy Death, one of the first Golden Age puzzle to tackle head-on - explicitly, rather than by implication - the notion of the 'altruistic crime',  which I explored in The Golden Age of Murder. If you can think of an earlier example, do let me know. Christie, Carr, and others tackled the 'altruistic crime' during the Thirties, but Berkeley led the way.

Apart from Sheringham, the writer Morton Harrogate Bradley, who had appeared in The Poisoned Chocolates Case, pops up in the story, albeit without contributing much. There's also passing mention of Alice Dammers, from the same novel. This novel reflects his habit of fictionalising real life places and people. There's a wonderful map on the endpapers of the crime scene, Minton Deeps, which was based on Berkeley's own Devon home, Linton Hills. I suspect that Paul de Revel and his glamorous wife were based on people in Berkeley's circle (E.M. Delafield and her husband Paul, perhaps?). The same may also be true of Armorel Scott-Davies, who plays a central role in the story.

The main problem with the novel is that, after a sprightly start, the pace drags. Berkeley's prose is never less than readable, but there is endless discussion about who was where and when. There are compensations in the way Berkeley juggles multiple false solutions, while the final revelation of the culprit is highly characteristic of his ironic approach to crime writing: he gives a fresh twist to a narrative technique that had been around for a few years. This novel was published in 1930, a year that in many ways marked a turning point in the genre. Berkeley was one of those who showed the way ahead, and his influence continues to be felt.

Martin,
The copy in the photo is now on my bookshelf. I quite like this dj.

Apologies for coming late to this one (I always seem to be apologising!).

I cannot suggest any Golden Age novels about altruistic murder, but I would like to propose two short stories: “The Abbey Grange” by Sir Arthur Conan Doyle and “The Hammer of God” by G K Chesterton.

In both cases, the murders are committed for selfless reasons and in both cases, the detectives, Holmes and Watson and Father Brown allow the murderer to escape the law, with the idea that justice transcends the law. Indeed, in “The Hammer of God”, Father Brown tells the killer he will not inform the authorities because “..you have not gone very far wrong, as assassins go.”

I don't think that these stories quite fit your definition of altruistic murder but I feel Berkeley would have known of them and perhaps they could have influenced his thinking.

Thanks, Michael. Good points. Those stories certainly do reflect the idea of moral justice and legal justice being rather different. I think Berkeley and co refined this thinking in the 30s, but it was certainly present before then.