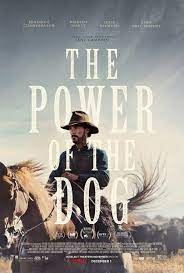 A few years ago Liz Gilbey recommended me to read Thomas Savage's novel The Power of the Dog, which was first published in 1967. I'd never heard of the book or the author and I was surprised when Liz told me that it was a superb crime novel - even more surprised when I bought a copy and started reading. But I soon realised that it's a terrific novel and that Liz's praise was well merited.

Now, more than fifty years after its first appearance, the book has been filmed, by Jane Campion no less. The lead character is the malevolent Montana rancher Phil Burbank and I must admit that if I'd been casting this part, I certainly wouldn't have thought of offering it to Benedict Cumberbatch. But I'd have been wrong. What a brilliant actor he is. Phil is a trick character to portray, but he does a great job.

On the surface, this is a Western, and I would not describe myself as a fan of Westerns (other than Butch Cassidy and the Sundance Kid). It's also a long film, a real slow-burner. The events of the book also move at a measured pace. I do feel that I enjoyed the film more because I'd read and loved the source novel. I felt Campion did Savage justice. It's an impressive piece of work.

I don't want to say too much about the storyline, but Phil and his amiable brother George (Jesse Plemons) are wealthy men who are very different but have a close relationship. That relationship is, in Phil's eyes, threatened when George marries Rose Gordon (Kirsten Dunst), a widow with a teenage son who is intelligent but not exactly macho. Kodi Smit-McPhee does a great job in the role of young Peter. It's a compelling story which is watchable and indeed gripping throughout - even if, like me, you usually prefer your stories to have a bit more pace.

This was a brilliant movie from top to bottom.

I'm glad you enjoyed it Martin. Now I'll have to read the book.

Good to hear from you, Patti. Yes, it's a terrific watch.

Due to a very large and distracting dose of real life, am finally catching up with more interesting things - so delighted to find this, Martin. Thank you for making a mental note of my enthusiasm for this book ('my' book; I have spent fifty years trying and failing to get people to read it! So all the hoopla following this wonderful film and getting more people to find this book feels like a fairytale and I am in a dream about it. (Yes, I know, very sad!) To update: the film has already won over 220 lesser awards, and is up for a record twelve Oscars on March 27. It certainly deserves eight of them, but then I am very biased.
I was fascinated to hear Jane Campion was to direct and adapt(it had been attempted five times before) and she would be a safe pair od hands, and that she cast Cumberbatch; quite amazingly, after seeing him in the Stoppard adaptation of Ford Maddox Ford's Parade's End. Could not be ore different. But he turned out perfect casting, and looks exactly like the mental image from the book of his character. No higher praise! I have fingers and toes crossed.

Thanks, Liz. As you've gathered, I was very grateful for your recommendation!