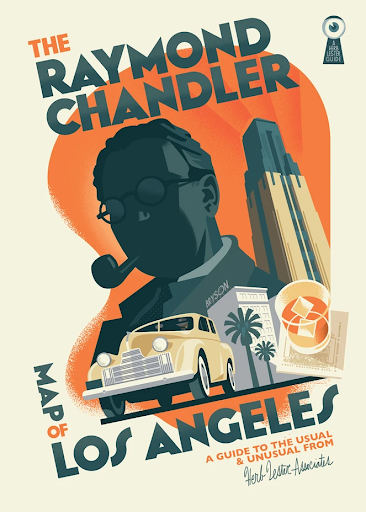 A couple of months ago I blogged about Caroline Crampton's attractive map of Agatha Christie's England. It's another nice idea - along with James Fleming's book, which I mentioned the other day - for a Christmas gift. And now here are a couple more ideas for those crime fans in your life. Two more maps, this time of American locations, but again produced by Herb Lester Associates. Above is a picture of one of them, The Raymond Chandler Map of Los Angeles.

The Hardboiled Apple is, of course, a map of New York, and it's created by Jon Hammer and Karen McBurnie. No fewer than 55 criminal locations are featured, and there is also a 'Timeline of Treachery' taking us from 1845 to 2018. The authors highlighted range from S.S. Van Dine and Ellery Queen to Donald Westlake and Caleb Carr. I was pleased to see mentions for faves of mine such as Cornell Woolrich and Kenneth Fearing and intrigued by some unfamiliar names, like Stefanie Pintoff.

The Chandler-related map is less complex, but includes various points of interest, from the Sternwood Mansion (of course!) to The Cypress Club. Some of Chandler's own residences in L.A. are also featured. As you might imagine, quite a number of the highlights are in or around Hollywood Boulevard. It would look good framed, I think.