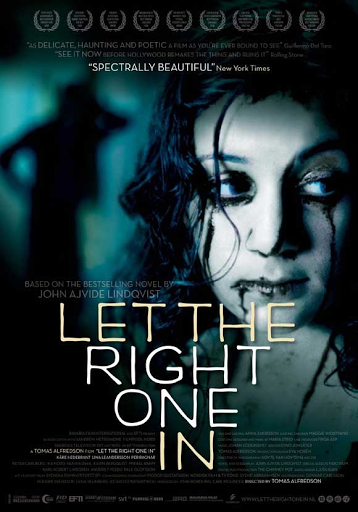 Let the Right One In is a Swedish horror film directed by Tomas Alfredson and based on a popular novel by John Ajvide Lindqvist, who also wrote the screenplay. It is highly rated by the cognoscenti and an American remake, Let Me In, was equally successful. I haven't read the book but I was tempted to watch the Swedish screen version, which is certainly out of the ordinary.

Oskar is a 12 year old boy who lives in a flat in a suburb of Stockholm with his mother, a single parent. He does see his father from time to time, but at school he is bullied by other boys. A girl of the same age, Eli, moves in next door. She's living with an older man, although he doesn't seem to be her father. The early scenes are episodic and at first the story's direction of travel is uncertain. But then the older man kill someone in a wood and harvests his blood. Before we know it, Eli too has killed someone.

Very disconcerting. But Oskar and Eli get to know each other and a strange bond develops between them - to such an extent that this is sometimes described as a 'romantic horror film'. Eli encourages Oskar to stand up for himself, and he takes her advice to heart to such an extent that he severely wounds one of the school bullies. In due course, they decide to take revenge....

This is quite a long film, and there are quiet patches, interspersed with bursts of dramatic action and violence. The overall effect is unsettling, as Alfredson no doubt intended. The cinematography is first-rate, capturing the eerie nature of the landscape, both rural and urban. I don't want to give too much away, but suffice to say that the story offers a new take on a familiar theme. It works well.