Forgotten Book - The Hammersmith Maggot aka Shadow of a Killer 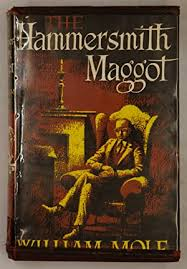 I can vividly recall where and when I first read William Mole's 1955 novel The Hammersmith Maggot. It was more than thirty years ago. I took the green Penguin edition with me when I stayed in a hotel in Hull one wintry night. I was due to conduct a tribunal case the following day, acting for a client who had been sacked simply for being pregnant because the employers thought they could exploit a loophole in the Sex Discrimination Act. It was a test case and after I'd spent a long time preparing for the morning, I relaxed by whizzing through the novel.

I'd heard one or two good things about it, but I was disappointed by the low-key nature of the storytelling and by the absence of a dramatic plot twist. With hindsight, I'd have been better taking a very different book with me. However, I came across a nicely inscribed first edition and decided to give it another try. Lo and behold! I liked it much better this time, partly because I had a clearer understanding of what the author was trying to do.

The author's real name was William Younger, and by profession he was a spy. He worked for the legendary Maxwell Knight and John Bingham was a colleague and friend. He wrote two or three thrillers, but this was the first of three novels to feature a wealthy wine merchant called Alistair Casson Duker. In this book he hunts down a conscience-less blackmailer (the 'maggot' of the British title of the book; the American title is much less memorable). The bad guy's identity is revealed at a relatively early stage, as is his motivation, but this time my attention was held.

The story is certainly out of the ordinary, and Francis Iles admired it, as did the often acerbic Barzun and Taylor. In more recent times, John Norris heaped praise on the book. Interestingly, a female blogger, Karyn Reeves, took a very different view. After two readings, I find myself rather in the middle. Mole (also a poet) could write well but there are traces of amateurishness in his sudden shifts of viewpoint. I don't think he thought deeply enough about how to present the character of the blackmailer or how to structure the story. But it's an interesting and unusual piece of work. As for that tribunal case, justice was done - and when the bad guys appealed, they got their come-uppance!

This was printed in the US under the title of 'Small Venom'. There was also a Dell paperback edition entitled 'Shadow of a Killer' in 1959.

Thanks, Jamie. I'm hoping to read a book by his wife Elizabeth Hely shortly