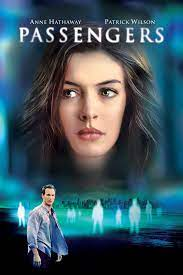 Passengers, the 2008 film not to be confused with the 2016 sci-fi film with the same title, is sometimes described as a 'romantic mystery thriller'. I was lured into watching it by the presence in the cast of Anne Hathaway, a terrific actor, coupled with the promise of mystery and thrills. And this film by Rodrigo Garcia is certainly well-made. But it's lacking in a number of respects.

Hathaway plays Claire Summers, a psychotherapist tasked with counselling a small group of passengers who were involved in a plane crash (there's a scene on board the plane at the start of the film). One of them, Eric (Patrick Wilson) is rather euphoric, and seems to know more about Claire than he should, for example concerning her estrangement from her sister. Recollections within the group vary about what happened immediately before the crash - was there an explosion?

The plot seems to thicken when Claire discusses matters with a man called Arkin, who is an airline official of unspecified seniority and who starts to behave rather suspiciously. He claims that the reason for the crash was pilot error. One by one, members of her group disappear, and Claire begins to worry that they are being stalked by the airline. She is increasingly attracted to Eric, but fearful that there is some kind of cover-up going on, orchestrated by the airline.

Are we in for a conspiracy thriller? At times it seems like it, but Ronnie Christensen's screenplay ultimately takes us in a different direction. I'm afraid that I found the Big Twist a Big Let-Down. This turns out to be one of those movies dependent on a particular trick which has been used plenty of times before, but only works well, at least in my opinion, in the hands of a master. I'm afraid I found watching Passengers to be a very frustrating experience. It crashes like the plane.

Yes...I didn't mind the twist, I certainly saw it coming, but the film is apparently under the impression It's Very Clever. Nope.

Young Ms. Hathaway still striking as well as talented. It pops up on cable on a slow day...