Forgotten Book - Death in the Hopfields 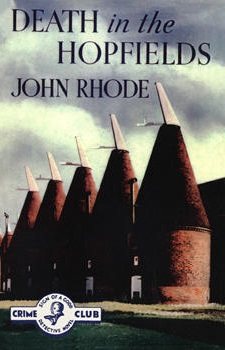 It is often said - not least by me - that one of the reasons why Golden Age detective fiction is enjoying considerable popularity to this day is that the books present a picture of a vanished world. We can learn a great deal about society, in particular English society, from crime novels written between the two world wars. If the past is a foreign country, Golden Age novels are often pretty good tour guides.

A picture of a long-gone society emerges clearly and in considerable detail in John Rhode's 1937 novel Death in the Hopfields. Set in Kent, 'the garden of England', this story explores the way that hop-pickers, often from the East End of London would descend upon rural communities to help pick the hops. As ever, coping with this kind of influx of seasonal workers had pros and cons, and Rhode explores these at considerable length. I found this background extremely interesting. Today, things are done very differently. From the 1960s, mechanisation changed the way the work was carried out.

It is as well that the background is rich in interest, because the detective story itself is less than gripping. Nick Fuller has reviewed the book on his admirable blog The Grandest Game in the World and has included a number of contemporary reviews. Even in 1937, it's clear that a number of critics were unimpressed by the detective elements and the glacial pace with which developments unfold. The suggestion by Torquemada that the background includes a lot of padding is not, I'm afraid, unfair. No wonder the Spectator found it 'heavy going'.

So what is the mystery about? Well, the starting point is a jewel theft and a case of arson follows. There appears to be an obvious suspect, but Dr Priestley gets involved, and needless to say, he is the one to put his finger on the truth, although by that stage I'd lost interest. Rhode clearly had a good idea for the disposal of a body, but what might have made a great short story is a very stodgy novel. I should say that the Puzzle Doctor liked this novel much more than I did. Overall, though, this is a book which vividly illustrates the problem of novelists who produce too many books too quickly. It's inevitable that quality will suffer.

Thanks for the mention, Martin!

Sayers commented that Rhode was a perfect elephant for work, but not an artist. He was almost a one-man fiction factory! Hop-Fields was one of a staggering five detective stories he published in 1937; they range from the very good (Death on the Board, Proceed with Caution) to the acceptable (this, Death at the Club).

It's a pity, in some ways, that Rhode didn't write more short stories; he had a fertile imagination for plots and methods, and because he over-produced, there wasn't always enough story or character interest to make a novel. But the age of the detective short story had passed, and novels paid much more!

I agree with you - this is far from Rhode's best work, and for me even the social details don't really compensate.

Thanks, guys. I agree about short stories, Nick. As you say, there were strong commercial reasons to turn those crafty howdunit ideas into novels, but too often he didn't do enough in terms of characterisation or plot elaboration to make them work and this one is definitely an expanded short story, I'm afraid.