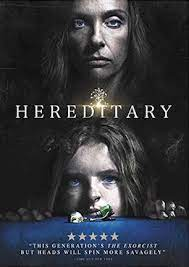 Hereditary was the first film to be written and directed by Ari Aster. He followed up with Midsommar, which I found slow-moving but very striking. The same can be said about his debut. It's over two hours long, and it's not without flaws, but it packs a punch - several punches, in fact. And like Midsommar, it's clearly superior to your average horror film. Aster is an ambitious writer and director, and aiming high brings rewards.

The film begins in the aftermath of the death of Ellen, a matriarch who clearly exerted a profound and questionable influence over her daughter Annie (Toni Collette). Annie is a miniaturist, and her work gives Aster the opportunity for a number of haunting visual effects. She's married to Steve, a part played with great restraint by Gabriel Byrne. Steve is a psychiatrist, but the film doesn't give us much confidence in his professional skills. The couple have two children, 16 year old Peter and the rather weird 13 year old Ellen, who was devoted to her grandmother.

An incident occurs which is so shocking that I'm reluctant to give a spoiler, although this does inhibit my discussion of the film. Suffice to say that Aster's presentation of grief is compelling. Annie is befriended by an older woman called Joan (Ann Dowd, who was equally excellent in a very different role in the remake of Rebecca) and gets involved in the murky world of seances.

Midsommar is a film that repays more than one viewing and the same is true of Hereditary. I didn't 'get' everything about either film first time around. Maybe that's my fault, a sign of lazy viewing, but I prefer to think that it's a tribute to Aster's skill and the depth of his vision as a storyteller. The endings of both films are, in some respects, over the top, but that's permissible in a horror film, and Aster is interested in something more important than cheap thrills. This is another haunting movie and I'll be interested to watch it again.

If you liked "Hereditary" you might like "Kill List"; it is another ultra violent film that starts as a thriller, then spins into something else entirely with an absolutely brutal ending.

On the subject of spinning things differently, the 1963 film "Paranoic" is an attempt by Hammer Films to "psycho" up Josephine Tey's genteel "Brat Farrar". Interesting.

Michael, thanks very much for these suggestions. I've heard of the Hammer version of Tey but never seen it. I'm also very interested in your mention of 'Kill List', which I've never seen - but I will give it a go on the strength of your intriguing comments.