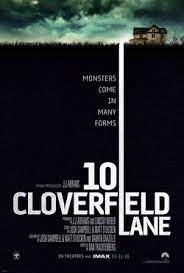 10 Cloverfield Lane is a movie that is loosely connected to Cloverfield, which I enjoyed watching not long after its original release. To describe it as a sequel would, however, be too much of a stretch. I gather that the storyline was originally conceived quite independently of Cloverfield, though there are connections in the version that reached the screen. I must say, however, that I felt it was the superior movie. In fact, it's one of the most striking scary films that I've seen in a long while.

Scary movies are, all too often, either not very scary at all, or exploitative and perhaps simply unpleasant. 10 Cloverfield Lane, on the other hand, is cleverly written, so that you never quite know what is going to happen next. I don't want to go into too much detail, since I don't want to spoil your viewing pleasure, but I think the screenplay marries two distinct types of story very effectively.

Michelle (Mary Elizabeth Winstead) is involved in a sickening car crash and wakes up to find herself manacled and confined to a basement. It seems that she is the captive of an apparently rather gross older man called Howard (John Goodman) and before long she discovers that they are not alone. Also in the basement is a young man called Emmett (John Gallagher). So far, so predictable, you may think. But you'd be wrong. Very soon, it starts to look as though the basement may be the safest place to be...

The excellent performances of Winstead and Goodman in particular make the most of the material. I was gripped from start to finish. The ending of the film has provoked some debate, and apparently some viewers don't care for it. However, I think it's very well-judged. This is a genuinely thrilling movie which for once doesn't skimp on characterisation. Yes, I was impressed.