Forgotten Book - He Who Whispers 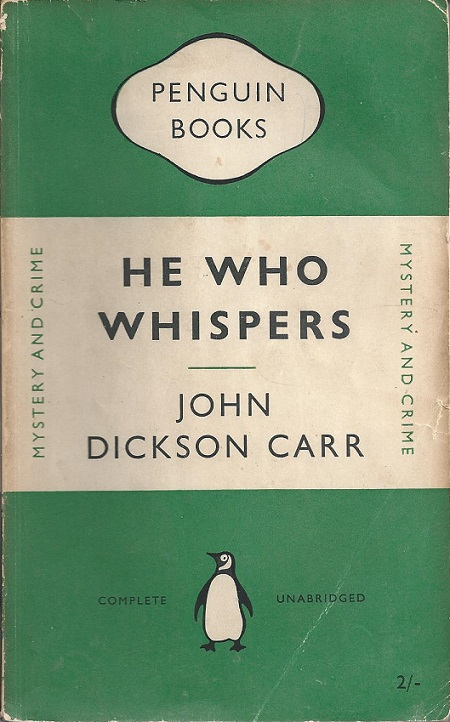 He Who Whispers was first published in 1946 and many people rank it as one of John Dickson Carr's finest novels. It features Dr Gideon Fell, my favourite Carr detective, and some crafty work with impossible situations. So why haven't I got round to reading it until now? Too many books, too little time, is the answer. But at last I've read the story - and with considerable pleasure.

The novel opens in post-war Soho. Miles Hammond has been invited to a dinner of the Murder Club, which seems to be modelled to an extent on the Detection Club and also on its true crime counterparts. However, when Miles arrives at the restaurant, neither his host (Fell) nor any of the other Club members are present. Instead, he meets a young woman called Barbara Morell and a French professor called Rigaud. What has happened to the Club members? This preliminary riddle turns out to be quite easily solved: what matters is that the conditions are ripe for Rigaud to tell his two companions a tale about a mysterious murder committed in France before the war.

The story of the murder amounts, in effect, to a fairly long flashback. I did wonder, as I was reading, why Carr did not opt for the greater immediacy of presenting the events as they happened, rather than in retrospect. On reaching the end of the book, I understood why he opted for this method, although I still think it might have been worth structuring the story differently. Fortunately, Rigaud's account is itself quite atmospheric, and the puzzle he presents is intriguing.

I don't want to say too much about the detail of the book, in order to avoid spoilers. The cast of characters is quite small and early on I spotted a point of similarity between this novel and one of Carr's early Bencolin books. This prompted me to come up with a theory about the puzzle that, I'm very happy to say, was completely mistaken. As a result, a crucial plot twist took me completely by surprise - yet it was adequately clued and foreshadowed. Fell isn't as prominent as usual, but this is an entertaining mystery in the classic tradition.


Please consider it for the british libray crime classics reprint.Its a pity that a book like this is OOP.

Your wish is my command!