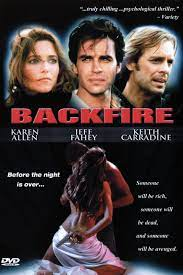 There have been several films called Backfire. The one I'm focusing on today comes from the late 1980s and is, I think, rather under-estimated (one commentator said it should have been called 'Misfire', a harsh verdict from which I dissent). The main trouble with any discussion, however, is that there are some interesting plot twists and it's not easy to avoid spoilers. But I shall try!

Jeff Fahey plays Donnie McAndrew, a Vietnam veteran who is suffering from PTSD as a result of his experiences in the military. He has terrible nightmares and he's also plagued with jealousy because he is upset by a relationship that his attractive wife Mara (Karen Allen) had with a local chap called Jake (Dean Paul Martin, whose last film this was before his tragically early death in a plane crash) ten years ago. Mara tries to reassure him, to no avail.

The McAndrews live in a vast mansion on the coast and are obviously a very affluent couple. If only Donnie could get over his mental health issues, everything would be fine. Or would it? The complications begin a at this point. An important character called Reed (Keith Carradine) comes into the story, but to say too much about him wouldn't be fair on anyone who hasn't seen the film yet.

The script is written by Larry Brand and Rebecca Reynolds, about whom I know nothing, but I think they do a pretty good job in creating a mystery that has familiar ingredients yet also benefits from touches of the unexpected. Yes, tighter direction might have built the suspense a little better, but I felt that Backfire supplied me with good entertainment.