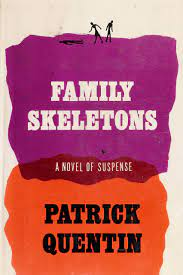 Patrick Quentin, in various incarnations, is an American crime author I've enjoyed reading for many years. The name (and the names Q. Patrick and Jonathan Stagge) conceals a complex set of collaborations, but in the 1950s the brand adorned a final run of books by Hugh Wheeler, writing solo. The last of the books, Family Skeletons, has eluded me until now, but when I had the chance to acquire Dorothy B. Hughes' review copy, I snapped it up.

Hughes was, like me, a Patrick Quentin fan, but I think she probably enjoyed the book rather more than I did. I sense that, by the time this title appeared in 1965, Wheeler was tiring of the game. He'd become established in the world of musical theatre, where great success still awaited him. This story has, as Hughes said, the touch of a professional - especially in the way that suspicion shifts around a pool of possible suspects. But there is something perfunctory about the whole exercise, as if Wheeler's heart wasn't really in it.

The problem is that Lewis Denham, the protagonist, is a rather irritating figure. He's a member of a rich (and even more irritating) family and when he marries in secret, he pretends, for no reason that I could find credible or remotely sensible, that he is not married. Then, when he and his new wife come across a body and realise that she might be a prime suspect, they make matters much worse for themselves by stupidly taking away the corpse and pretending that nothing has happened.

Overall, I felt that this was a story where the characters behaved in the way that they did mainly in order to build the suspense. Yes, contrivance is permissible in a crime story, but it needs to have a touch of believability and we usually need to empathise with at least one of the characters. Wheeler was a talented writer, and he could characterise rather more effectively than he does here. He was also adept at plotting, but I'm sorry to say that, some time before the end, I lost interest in the whodunit twists. This isn't a bad book, but there are certainly a good many better Quentin books than this one. Why was it the last? Probably because Wheeler was smart enough to realise that he'd lost his touch.

I would agree that Lewis Denham is not as positive a character as Wheeler's other protagonists and that this is a weakness, but for me this remains a far more impressive book than almost any other crime novel of its time (or of our time). When you say that 'contrivance is permissible in a crime story', surely every fictional crime story is contrived? And here, the sheer artistry of the plotting, the psychological tension, the economy of the storytelling, and Wheeler's handling of the outsider theme (which recurs in his work) are all outstanding.

Thanks, Christopher. You're right, fiction is by definition something that is invented and crime fiction usually involves elements of the dramatic or melodramatic, disproportionately so in relation to real life. However, I think that (with some exceptions) crime writers tend to aim for a sense that the twists and turns in the storyline do not seem mechanical and creaky but 'natural' within the context of the novel. In his best books (including The Crippled Muse) Wheeler did a terrific of making his stories believable. I didn't think that this final book reached those high standards. Because I didn't really believe in what Denham was doing, I didn't empathise with him or get that sense of psychological tension in the way I did in his earlier work.