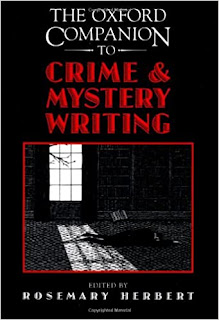 In the lead-up to publication of The Life of Crime, I was asked last week about my favourite books relating to the crime genre. This prompted me to think back to the appearance of The Oxford Companion to Crime & Mystery Writing, edited by Rosemary Herbert, which was finally published in 1999, but was a very long time in the making.

Let's rewind to the late 1980s. At that time, I was reviewing and writing about crime fiction for a number of publications and also working on the novel that became All the Lonely People. I'd been taken on by an agent, Mandy Little, and I told her of my interest in writing a book about the genre. At that point in my embryonic career, I certainly wasn't foolhardy enough to believe I was equipped to write such a book on my own (a vital catalyst came years later, in a conversation with Andrew Taylor) but I thought I could marshall a book of essays. So I pitched to her the idea of an Oxford Companion about the genre. As luck would have it, Mandy was friendly with Michael Cox of the OUP, and he visited me in Cheshire to discuss the project. Michael was a delightful chap and we had a pleasant afternoon, walking around Lymm Dam in the sun. He later became a very successful novelist prior to a tragically early death. He was enthusiastic about the project, and things were looking good. I was excited.

Then came the news that, unbeknownst to him, OUP in the US had commissioned a very similar book to be edited by Rosemary Herbert. So 'my' Companion bit the dust. This was a shame, especially as it came during a period when a couple of my other pitches met a comparable fate - I was beaten to it by better-known writers - but that's life. It's quite common - a point I make in The Life of Crime - for several authors to have similar ideas at much the same time. I was very pleased when Rosemary asked me to write essays for her Companion. Time went by and requests to contribute further pieces came my way. In the end, I think I contributed more essays than almost anyone else. Later, I met up with Rosemary, and found her delightful company. She even commissioned a new Harry Devlin story for her anthology Murder on Deck.

The main problem with the Companion was simply that it took so long to produce. Robert Barnard and Catherine Aird were in the team supporting Rosemary, and I suspect that all of them were probably frustrated by the delays, which saw several editors at OUP in New York come and go. I began to wonder if the book would ever appear and sadly quite a few contributors, including Julian Symons, who wrote several essays for the Companion, died before it saw the light of day.

However, it was most definitely worth waiting for and I think it's still got a lot to offer the student of crime fiction. There are some wonderful pieces by a range of very well-informed writers - the essay on 'Singletons' by Barry Pike is one example, but I could mention many more. The book earned an Edgar nomination and to me, the only surprise is that it isn't better known today. Rosemary and her team did a great job, in what I suspect were challenging circumstances, and she also produced, in 2003, a slimmed-down version, Whodunit? A Who's Who in Crime Writing in which she generously included an essay about a young novelist called Martin Edwards. So although I never got to edit an Oxford Companion, this particular story led to what, for me, was a happy ending.

Yes, I have that on my shelves - very enjoyable for dipping into. Your post gave me a reminder of what other surveys of crime fiction I have. Your own 'Golden Age of Murder' and '....100 Books' of course. The classics - Symons 'Bloody Murder' and Watson 'Snobbery with Violence'. An older volume I picked up second hand somewhere, Howard Haycraft's 'Murder for Pleasure'. Ian Ousby's 'Crime and Mystery Book', an absolute favourite. And a compete outlier, Ernest Mandel's Marxist take, 'Delightful Murder', which I suspect I'd raise an eyebrow or two at these days. Just as I often prefer to read about cricket to actually watching it, so reading about crime fiction can be more satisfying than reading some of the books themselves...But then, there's the new Nicola Upson to look forward to! And did you say there's a new Rachel Savernake in the offing?

Thanks very much, Mike. We share various things in common, including a fondness for cricket! Nicola's new book is very enjoyable and yes, Blackstone Fell appears in the UK in September. Haycraft, Ousby and Mandel all have interesting things to say and feature in the select (but rather long...)bibliography in The Life of Crime.