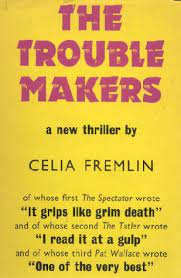 I've spoken before on this blog about my admiration for the work of Celia Fremlin. She's one of the authors to whom I've given quite a bit of attention in The Life of Crime. Inevitably, it's only been possible for me to talk at length in that book about a selected number of authors whose work I love, but I do see her as influential and important in terms of the development of domestic suspense.

Francis Iles, a very shrewd critic and excellent judge of writing quality, heaped praise on Fremlin's first two books. She didn't need to focus on violence and murder in her stories. Skilful characterisation allowing for the creation of tense situations was her forte. The Trouble Makers, her fourth book, first published by Gollancz in 1963, is a case in point. It presents a picture of suburban life which is as disturbing as it is compelling.

The lead character is Katharine, a harassed mother of three girls whose marriage to Stephen is far from blissful. She takes solace and indeed pleasure from the fact that her friend and neighbour Mary seems to be having a worse time in her own marriage, to an older man called Alan. A number of other women in the neighbourhood who are friendly with Mary also enjoy feeling superior to her.

This is a subtle, slow-burning novel which presents a rather horrifying picture of the interactions between a number of women. Their husbands have considerable failings, but they remain in the background. Fremlin's focus is on the shortcomings of her own sex. To what extent her views were influenced by her own experiences, I don't know, but the outcome is truly chilling. Fremlin describes a way of life which in some respects now belongs to the distant past, but there is something timeless about her portrayal of the casual cruelties of which seemingly decent people are sometimes capable.

Labels: Celia Fremlin, The Life of Crime, The Trouble Makers