The Secret, Landscapers, and The Thief, His Wife, and The Canoe 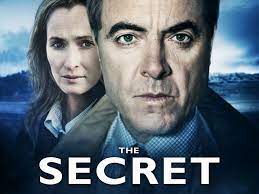 When you write a screenplay about a real life criminal case (not that I've ever done it!) you have to make choices about how you handle the material. Choices about style, tone, the extent of fidelity to the facts, and so on. Will the story be told chronologically, or in some other way, for example with the discovery of the crime or the arrest of the culprit? How you tackle these questions will determine, to some extent, the success of the end result.

A case in point was The Salisbury Poisonings, which I reviewed a couple of years back. That show was much acclaimed, and it did have plenty of merit but I think that with time, its limitations are increasingly evident. In retrospect, its failure to address the reasons for the crime and the Russian background seem, arguably, symptomatic of the attitudes in the West that prevailed prior to the recent invasion of Ukraine. Society didn't look closely enough at what was going on.in Russia.

I've recently watched three very different TV dramas based on real life crimes. One was The Secret, a 2016 series which took a relatively 'straight' approach to the material - a conspiracy by an Irish dentist and his lover to murder their respective spouses. It's an extraordinary case and I felt the writers handled the material very well. The performance of James Nesbitt as the homicidal dentist with supposedly strong religious convictions was especially fine.

Landscapers, starring Olivia Colman and David Thewlis, takes a very different approach. This story of another couple who kill is treated as a black comedy. Again it's been greatly praised, but I must admit to finding the episodic handling of the story as unsatisfactory as its tone. Colman and Thewlis are excellent actors, but I seem to be in a minority in finding the way the crime is handled to be far from appealing.

Rather better, I felt, was The Thief, His Wife and The Canoe, Chris Lang's version of the John Darwin fraud case. It's a fascinating story of a Walter Mitty character, played by Eddie Marslan, and his wife (Monica Dolan: excellent). I once listened to an account of the case by a police officer who was involved with it, and I think that this version owed quite a bit to Chris Lang's imagination. But the characters seemed to be treated with greater respect than in Landscapers and I enjoyed it.