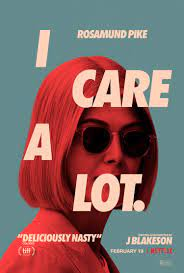 I Care a Lot is a fairly recent film which blends thriller elements with black humour and makes a few s stinging points about capitalism along the way. Because it's set in the US, I was surprised to learn that the writer-director, J. Blakeson (Jonathan Blakeson) is English, born in Harrogate and educated at Warwick. Overall, I think he does a good job, because despite various flaws, this is an entertaining and watchable movie which is especially good in the early scenes.

Rosamund Pike is Marla Grayson, who - assisted by Fran (Eiza Gonzalez) - works as a court-appointed guardian of old people who are incapable of looking after their own affairs. It soon becomes clear that Marla targets wealthy individuals whose assets she can sell and profit from. This very lucrative business is supported by a lax judiciary and corrupt medical profession. It's all the more horrific because it seems believable.

Things start to get complicated when she picks on a perfectly healthy old lady who lives on her own. This is Jennifer Peterson, played by Dianne Wiest. Marla manages to get Jennifer confined to a hospital, having conned a judge (with the help of false medical information) that Jennifer can't look after herself. It soon becomes clear, however, that this time Marla might have bitten off more than she can chew. Jennifer is not the sweet innocent she appears to be...

There are some funny scenes involving a Mafia lawyer called Dean Ericson (Chris Messina) which I found truly enjoyable highlights. Peter Dinklage is also good as a bad guy who makes a formidable adversary for Marla. But it's Rosamund Pike who holds the film together, even when the script begins to wander in a rather unconvincing way. The climax to the story doesn't appeal to everyone, and it's not overly subtle, but on the whole I think it worked. An entertaining film which, every now and then, makes you think about how society treats vulnerable people.

I thought this film was excellent - funny and thought-provoking - and I was surprised that it didn't get more attention. And that some of the attention it got was quite negative.