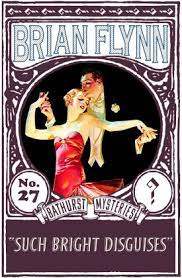 Steve Barge blogs as The Puzzle Doctor and his In Search of the Classic Mystery is one of my favourite crime fiction blogs. His enthusiasm for books he likes is infectious and I am especially impressed by the way he has championed the work of Brian Flynn, an author to whom I must admit to having paid no attention until the past couple of years. Thanks to Steve, the Flynn books have been reissued by Dean Street Press. Flynn was what would now be termed a 'midlist author' - meaning, among other things, that his publishers never bothered much about promoting his work - and it is good that, so many years later, he is now receiving a fair amount of attention.

My eye was caught by discussion of Flynn's 1941 novel Such Bright Disguises and I've just read the book for myself. Steve doesn't discuss the story in his intro, but covered it in a blog post a couple of years back. Two more of my favourite blogs, Mysteries Ahoy! and Pretty Sinister Books have also discussed the story. These three bloggers are good judges (I don't say that merely because I often find myself agreeing with their opinions!) and it's noteworthy that they all have a lot of time for Such Bright Disguises.

This is undoubtedly an interesting and unusual story. The combination of inverted mystery and whodunit is highly intriguing, with several touches of originality. I haven't read much of Flynn, but my strong impression is that he was a very good ideas man. This is an invaluable trait in an author of classic mysteries. There were various highly surprising developments in the narrative which definitely took me aback. Overall, it's an ambitious piece of writing and I find that admirable.

One thing Flynn lacked (like so many authors, past and present) was a high-calibre editor. He was no prose stylist (although I suspect he thought otherwise) and the rapid shifts of viewpoint in some chapters diminish his attempts, praiseworthy as they are, to depict the characters in more depth than is commonly found in many Golden Age mysteries. (there's even a decorous sex scene). We have to digest sentences such as: 'Strange to relate when we recall Hubert, who was their only child, Ralph Grant was a total abstainer.' Some of the clunky writing was surely attributable to Flynn's hurrying too much with his work. He was - like a number of characters in the story - a finance man in local government - and, believe me, I know how difficult it is to combine a busy professional life with writing novels. I just wish he'd considered writing fewer books, and writing them a little more elegantly.

Having had such an excellent idea, brimming with potential, I feel Flynn could have done more with it. The final section is oddly abrupt after a long and elaborate build-up. Faced with two deaths, the police seem to give up right away and call in the private detective Anthony Bathurst to do their work for them. I understand that including Bathurst may have seemed like a commercial imperative, but the haste of the wrap-up was unconvincing and smacks of a surrender to deadline pressure. As a result, this isn't the book it might have been, a masterpiece in the Ironist tradition, as good as anything written by Bruce Hamilton or Richard Hull. However, I don't want to damn this book with faint praise, because it is a striking and genuinely enjoyable read, which I am more than happy to recommend. Dean Street Press and Steve Barge deserve congratulations for making it available once again.