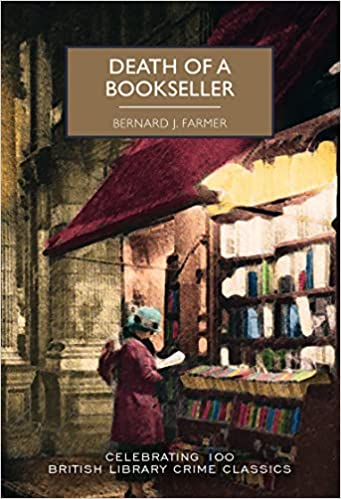 The one hundredth British Library Crime Classic has now been published. The title in question was, appropriately enough, a 'bibliomystery', Bernard J. Farmer's Death of a Bookseller, complete with a message on the inside cover from me to series fans. My association with the series dates back to July 2013, when I first met the then publisher, Rob Davies, who asked me to write intros for a couple of forthcoming titles by John Bude. I'd been writing intros for republished crime novels since the mid-90s, but it's fair to say that none had come close to the bestseller lists. And neither Rob nor I dreamed that the series would become such a runaway success.
It's interesting for me to cast my mind back to that stage in my career. I'd just published my sixth Lake District Mystery, The Frozen Shroud, but I was still a partner in my firm (although by that stage working four days a week). I was hard at work on The Golden Age of Murder, a project which had occupied me for years, and it seemed far from certain that book would even find a publisher. Suffice to say that the intervening years have been kind  and the Crime Classics have certainly played a part in my enjoyment of that time. Many have followed in the British Library's footsteps, sometimes splendidly, sometimes not quite so splendidly. From my point of view, it's marvellous to see so many long-neglected books becoming available again at affordable prices. The series' influence on the wider publishing world has been quite remarkable. Meanwhile my postbag (and the sales figures) indicate little doubt that the Crime Classics remain comfortably ahead of the field.
There have been many British Library-related highlights for me during the past nine years. I loved being given the chance to write a new solution to Anthony Berkeley's The Poisoned Chocolates Case: short as it is, I've been gratified by the response from reviewers and readers. The same is true of reaction to the eighteen anthologies (with two more on the way) that I've edited for the series. My companion volume to the series, The Story of Classic Crime in 100 Books, was nominated for five awards and won one; among other things, it's now been translated into Korean and Chinese. I designed a murder mystery for a pop-up shop at the Library one Christmas and I've also held a weekend masterclass on classic fiction there and been interviewed in the Library's Conference Centre, with Ann Cleeves, by Mark Lawson. There have been lots of other events, including last year's lovely visit to Ely, with more in the pipeline. I'd like to pay tribute to Rob and his successors at the Library and express my thanks for their encouragement and faith in my suggestions..
Today the Crime Classics are famous enough to merit a mention in Anthony Horowitz's Moonflower Murders. All this demonstrates how much people enjoy a well-made and entertaining story. I certainly don't choose all the titles or authors for the series, but I'm glad to have played a particular part in the rediscovery of interesting novels by such varied writers as E.C.R. Lorac, Mary Kelly, John Dickson Carr, Richard Hull, C.E. Vulliamy, Anne Meredith, Peter Shaffer, Christianna Brand, Nap Lombard, Raymond Postgate, and Margot Bennett. Do I admire every single book in the series equally? Of course not; the range is, quite deliberately, too diverse for that. Do I think that the series has made a wonderful contribution to readers' pleasure across the world? Absolutely.
Posted by Martin Edwards

Labels: Death of a Bookseller, Moonflower Murders, The Golden Age of Murder, The Poisoned Chocolates Case, The Story of Classic Crime in 100 Books

Congratulations to the British Library and to yourself for informative introductions and for the selection of stories in the anthologies you’ve edited. I’ve the whole 100 books and they make brilliant reading.

Congrats and thanks for your part in bringing hours of reading pleasure! Looking forwards as always to many more to come. It's a great thing the BL reprints have done.

David and Anon - thank you. And David - very well done on collecting all one hundred!