Reader, I Buried Them by Peter Lovesey - review 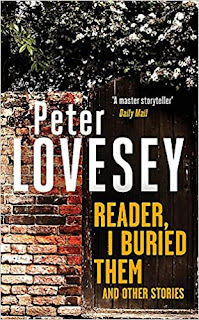 I had an advantage when coming to review Peter Lovesey's new collection of short stories, Reader, I Buried Them. A number of the stories included appeared previously in anthologies that I've edited over the years. It's always a great joy to receive a submission from Peter. The quality is high - that's a given - but what I love particularly is the sheer variety and the consistent enjoyability of his writing. There are plenty of fine examples in this book.

Peter is a brilliant ideas man. Fresh concepts spring to his fertile imagination with astonishing consistency. In a pleasing introduction to the book, he tells a good story about his first published short story, 'The Bathroom', which earned the admiration of Ruth Rendell and her encouragement to continue with the short form as well as his novels. The story is included, and so is a splendid companion piece of non-fiction, 'The Tale of Three Tubs', which I featured in my CWA collection of essays about real life crimes, Truly Criminal.

Some of the clever ideas may, I suspect, have sprung from a great idea for a title - such as 'A Three-Pie Problem', featuring Peter Diamond, and also the title story of the book. There are nods to Patrick Hamilton in 'Gaslighting' and to Edgar Allan Poe and Agatha Christie in other stories. The stories vary in length as well in style and one of the very shortest, 'Agony Column' is appealingly jokey. There's an amusing monologue at the end of the book and a comprehensive checklist that will be invaluable for Peter's many fans.

Need I add that I found this book highly entertaining from start to finish? And there was a little bonus when I looked at the back cover. There were three well-deserved encomia. One from Ruth Rendell herself. One from Val McDermid. And one from me. Great company to be in - a company of long-term Peter Lovesey fans.

Perhaps that should be a Cribb of Lovesey fans!

I like that, Michael, and I shall pass it on to Peter!