Forgotten Book - Mischief in the Offing 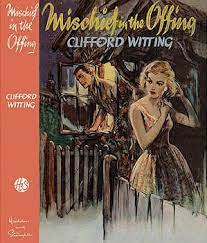 Sussex isn't a county that I know particularly well, but during my last two visits to Rye, I've made a point of travelling round and enjoying the county's coastline and the rural landscape. It's a nice part of the world, for sure. So I was tempted by the setting of Clifford Witting's Mischief in the Offing. The action of the story takes place in Wilchiston, a thinly veiled version of the village of Alfriston.

The story begins with the arrival of a strange visitor at John Denman's cottage. An attractive young woman called Kay Forrester turns up, seeking sanctuary. She claims to have been molested by a man with a gun. John is a likeable fellow, but he soon has reason to believe that she isn't telling him the truth. And then a shot is fired at the cottage.

This is a good start, but after that the pace falters, to put it mildly. Witting's writing style can fairly be described as discursive, but here 'rambling' might be a better word. There's a lack of focus in the storyline and I found it difficult to care much about what was happening. Yet there are compensations, including the agreeable presentation of rural life (including a game of stoolball) and touches of Witting's amiable humour.

This book appeared in 1958, at the time Witting was elected to membership of the Detection Club, and there are one or two nice plot features, including a revelation in the final sentence. For me, though, the story lacked tension. I like the fact that Witting was not content to rest on his laurels as a writer, and didn't keep resorting to the same-old,same-old. But this one is a decidedly minor entry in his catalogue.

When I read it I thought it was very feeble, hardly crime fiction at all. And I think the last line revelation is given away on the dust-jacket