Diamond and the Eye by Peter Lovesey - review 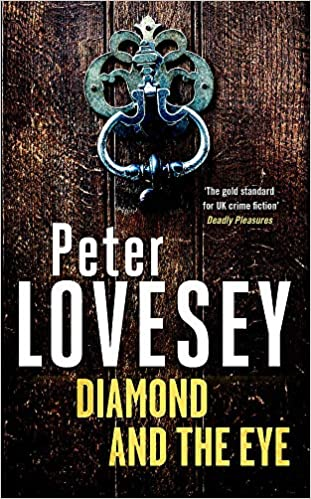 It's one thing to be prolific. To be prolific and innovative is quite another. Yet Peter Lovesey, more than fifty years after he burst on to the crime writing scene, continues to try out new ideas. This literary ambition, this willingness to take risks, this refusal to be content with the same-old, same-old, is one of the qualities that distinguishes the best writers. Their number certainly includes Peter, who is the only living author in Britain to have received the CWA Diamond Dagger and also been made a Grand Master of the Mystery Writers of America.
Now he's come up with Diamond and the Eye, the rear dust jacket of which carries a quote from this blog, which I was rather pleased and proud to see. It's the twentieth in his long-running series about Bath cop Peter Diamond, and he's celebrated by trying something very different and quite unexpected. To the third person viewpoint chapters featuring the police investigation are added chapters told in the first person by a character new to the series, Johnny Getz, who happens to be a private investigator based in Bath.
There is always a touch - and sometimes a generous helping - of humour in Peter Lovesey's novels, and here he focuses on having fun. In particular, he enjoys himself by parodying the style of the classic American private eye novelists, notably Raymond Chandler. Chandler is name-checked several times, and so are various other writers and gumshoes, including one of my own favourites, Amos Walker, created by Loren D. Estelman. The comedic ingredients also include a femme fatale in the unlikely shape of the much-married Lady Bede, who happens to be a member of the local police ethics committee.
The story begins with Johnny investigating the disappearance of a dealer in art and antiques and this forms the prelude to a convoluted case in which the equivalent of the Maltese Falcon is a work of art which, although fictional, has its origins in a piece of Bath's real-life history. This is a less serious mystery than the general run of the Diamond series, but I suspect that during the pandemic Peter was in the mood for light relief and I'm sure his many fans will feel likewise and welcome this good-natured jeu d'esprit
Posted by Martin Edwards