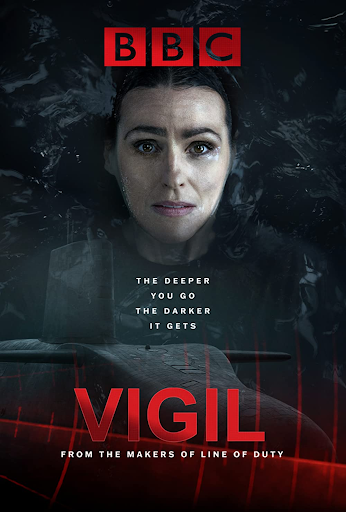 When I was a small boy, I sat through innumerable episodes of an American TV series called Voyage to the Bottom of the Sea, starring Richard Basehart and David Hedison. My Dad was a big fan of the show,  which was set on board an American nuclear submarine, but I was rather less enamoured. Suffice to say it was very different from Vigil, a thriller series written by Tom Edge. It's set on board a British nuclear sub and has just come to the end of its six-episode run on BBC TV.

Any series about nuclear submarines is almost certain to involve espionage as an ingredient, but Vigil scores right from the start as it concerns an investigation of a murder on board HMS Vigil, which occurs shortly after the mysterious capsizing of a fishing trawler. DCI Amy Silva (the talented and ubiquitous Suranne Jones) is the top cop sent on board to figure out who killed bolshy crew member Burke (Martin Compston).

Amy suffers from claustrophobia, so sending her on to a submarine seems rather like an act of cruelty, despite her brilliance as a detective. But of course, in the finest tradition of Great Detectives, she goes for it. She has a complicated backstory, which emerges through a lengthy sequence of flashbacks. Her male partner drowned in a car accident for which she blames herself; she rescued his daughter from the car, but lost custody to the girl's grandparents. She then fell for a younger female cop, DS Kirsten Longacre (Rose Leslie), but that relationship has run into difficulties. While Amy gets embroiled in a complex series of goings-on on board Vigil, Kirsten investigates the murder of Burke's anti-nuclear activist girlfriend Jade on dry land.

The Vigil's crew includes some familiar faces, notably Shaun Evans, better known to me as the young Morse in the highly enjoyable Endeavour (I've seen two episodes of the new series eight so far, and they are definitely up to standard). Suranne Jones and Rose Leslie are terrific, and so is Stephen Dillane, who plays a crafty rear-admiral who knows more about what is happening in the depths of the sea than he's prepared to admit.

Vigil has proved very popular, but it's also received plenty of criticism, partly because of technical inaccuracies, partly because the final revelations were regarded by some as disappointing, and partly because of a perception of political bias. I enjoyed it with very few reservations (the main one being that the final fifteen minutes felt more like a conscientious soap opera than a thriller). Unlike all too many six-part series, it was packed with action and didn't outstay its welcome. Of course this means that some aspects were convoluted and over-the-top, but a story of this kind demands the suspension of disbelief and I was more than happy to suspend mine.