Forgotten Book - Case with No Conclusion 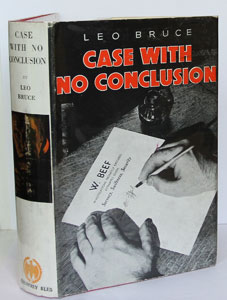 Leo Bruce's third book about Sergeant William Beef, originally published in 1939, was Case with No Conclusion. The title is enticingly challenging - it suggests something very different from the conventional Golden Age mystery in which, so we are often told, order is disrupted only to be restored at the end. And there's no doubt that the central plot idea is a strong and attractive one.

Two features of the Beef series help the books to stand out from the crowd. Lionel Townsend is an entertaining narrator, constantly bemoaning Beef's failings, and just as consistently missing the point. He really is one of the most enjoyable and distinctive Watson surrogates in detective fiction. Add to this the plentiful references to the detective genre, and you have a sort of light-hearted metafiction which is very agreeable.

In this story, Beef has left the police and set up as a private investigator. But were his early successes in detection simply due to luck? This question lies at the heart of the story. Peter Ferrers engages his services in connection with 'the Sydenham Murder'. Peter's brother Stewart has been arrested in connection with the killing of an unpleasant character called Dr Benson. But was Stewart guilty? Beef becomes convinced that he was not, but he struggles to prove it.

The only reason why I don't rate this novel as a minor classic of its type is that I feel it sags in the middle, with a cross-Channel foray that seems rather like padding. I think that Bruce, like so many other Golden Age novelists (Richard Hull is an example that springs to mind) found it relatively easy to come up with clever ideas, but didn't always supply enough ancillary plot material (or strong characterisation) to make his novels gripping from start to finish. It might be harsh to say that here we have a brilliant idea for a short story, expanded beyond its natural length, but I do think the storyline would have benefited from further development and texture. But I don't want to criticise too severely, because it was an engaging read and confirmed my enthusiasm for Sergeant Beef.

I have found it difficult to develop a taste for the Sergeant Beef books, actually--I appreciate the cleverness of the buffoonish narrator conceit but I don't really *like* reading it. On the other hand, I absolutely adore the Carolus Deene novels, which crime fiction buffs seem to rate much lower than the Sergeant Beefs. It's one of the ways I've felt out of step with some of what appears to be the crime buff consensus.

Hello Kacper - there's nothing wrong with being out of step with some of the consensus! I mus give Deene a try if you like them.